Last Monday was the twentieth anniversary of Hurricane Fran. I’ve written a lot about Fran here on MT.Net so I won’t geeze and do it again now. I will say, though, how much Raleigh has changed since Fran, and that I’m struck by how many people now living here have no memory of Fran because they weren’t here.

For those of us who were here, though, it will be something we never forget.

I thought today’s date looked familiar. Today’s the anniversary of the morning after Hurricane Fran came ashore. For some like me, the night it came ashore and the following day blended together, as I didn’t get much sleep after a tree came to rest 3 feet away from my once-sleeping head.

(I blather about this every year, don’t I? A sign of geezerhood?)

There’s a weak storm churning off of Wilmington now which hopefully will bring rain to the parched state. Let’s hope it stays weak, but brings the rain.

It was ten years ago this evening when Hurricane Fran came ashore at Cape Fear and raged through central North Carolina with devastating flooding and 80 MPH winds.

At the time, I was a young IT manager at a local software startup. I was working late because a technician was working on our phone system. My friends hung around to play some network games. Earlier in the day we had watched the forecast ominously, having a feeling that this storm was going to be a bitch. Someone made a run to the store for ice and beer and those of us not working had a pre-hurricane party at the office.

As the wind picked up, my coworkers all high-tailed it home, leaving me to wait for the tech to finish up. Finally he departed and I left the office. As I made my way south on the Beltline, I saw the sky filled with the eerie green glow of arcing high voltage power lines. Civilization was already coming unglued.

I arrived back home around 10 PM, grateful to see the power still on at my apartment. My brother Jeff, who lived a few doors down, was waiting on my doorstep. He managed to lock himself out of his apartment the night of a hurricane.

I let him in and got him back into his apartment before I settled down for some sleep. The wind hadn’t gotten too strong at that point and my roommate was out, so there seemed to be no reason to wait up. I fell into a light sleep as the wind slowly began to build.

I had just drifted off into deeper sleep when I was awakened by a deafening crash. Right above my head a falling pine tree had punctured the wall. I leaped out of bed to see all hell breaking loose in the apartment complex. Beautiful oak and maple trees were getting beaten up by the hurricane-force winds. Rain pounded the window as I watched. Lights flickered around me until finally they surrendered. The rest of the night was spent watching those trees slowly get ripped apart before my eyes. I caught some more restless sleep before dawn, which was announced not by the usual buzzing alarm clock but instead by the striking silence of a city stilled by a hurricane.

At the light of day, I ventured out to check the damage. The tree that almost took me out was lying harmlessly next to the building. Fortunately it was the only one to fall on the building. While the complex was filled with trees, few caused any real damage. Out of over 200 residents in the complex, only one had his or her car damaged by a falling tree.

Amid chainsaws and tangled power lines, I dutifully ventured into the office to check on the building. Aside from the usual leaks in the roof, things were safe. The magnetic door locks had run out of power, leaving the building open to anyone. Some UPS systems continued to buzz. I locked everything up and toured the nearby neighborhoods looking for damage.

The office was near North Hills, which had gotten hit especially hard. I could not believe the tree damage around me. Fran had softened the trees up with two weeks of torrential rains before it raged ashore with its 135 MPH winds. The trees never had a chance. I quickly saw that traveling further would be impossible in the tangle of debris so I headed back home to see what I could do there.

By some miracle, my apartment still had running water, so my nearby friends came over to shower. While there, many of the coffee drinkers turned positively homicidal. They were willing to travel all the way across town to feed their caffeine fix. I decided right then and there to kick my own coffee habit. No way did I want to be a slave to that.

Later that day, we decided to make the most of the situation by throwing a hurricane party. We cooked up the thawing meat from the freezer, drank heavily and marveled at the crystal-clear starry sky above us. It was a wonderful coming together during a rough time.
The next morning I got notably sick, blaming the culprit on “bad ham” rather than the 4-5 drinks I had the night before. Bad ham has since become an inside joke among my friends.

By some miracle, my apartment complex got power back within three days, at which point my roommate and I became even more popular. Others weren’t so lucky. My parents, living out in the boonies that was Falls Lake at the time, went two weeks without power. Those who didn’t have any were welcome to stay with us, and some did. You’d be amazed at what a hot shower can do for a person’s morale.

I remember not having enough cash because the ATMs were all down. I remember people lining up for bags of ice distributed from trucks. I remember the Hillsborough Street Waffle House being the destination for many coffee drinkers because of it never losing power. I remember the unending drone of chain saws. And more chain saws. More than you’d care to count.

I remember the huge tree that planted itself gently on my parents’ house, and the damn fool way we all moved it off, wielding chain saws above our heads. Its amazing someone didn’t get killed. We had to do it, though, because no one else would. Not for weeks, anyway.

I remember huge oak trees ripped from the ground, everywhere you looked. Pine trees sheared off thirty feet off the ground. Bark and pine needles everywhere. And strangers pitching in to help move logs or just to see if you were all right.

Yes, I think Fran united people in the Triangle in ways which newcomers will never understand. You either were there or you weren’t. Around town the mention of Fran can still strike up animated conversations about that night. Its funny how a destructive storm can wind up binding people together.

At the same time, Fran took the fun out of taunting hurricanes. I’ve lived it once, thank you, and do not wish to live it again. While there will undoubtedly be other storms, none will pack the whollop of Hurricane Fran.

Today is the 6th anniversary of Hurricane Fran. It was 1996 when it rolled in and rocked my world.

I will pull out all my pictures of the devastation and remember it all. Maybe even post a few when I can.

As Hurricane Frances plods across Florida today, it occured to me that another devastating hurricane hit this day eight years ago: Hurricane Fran. 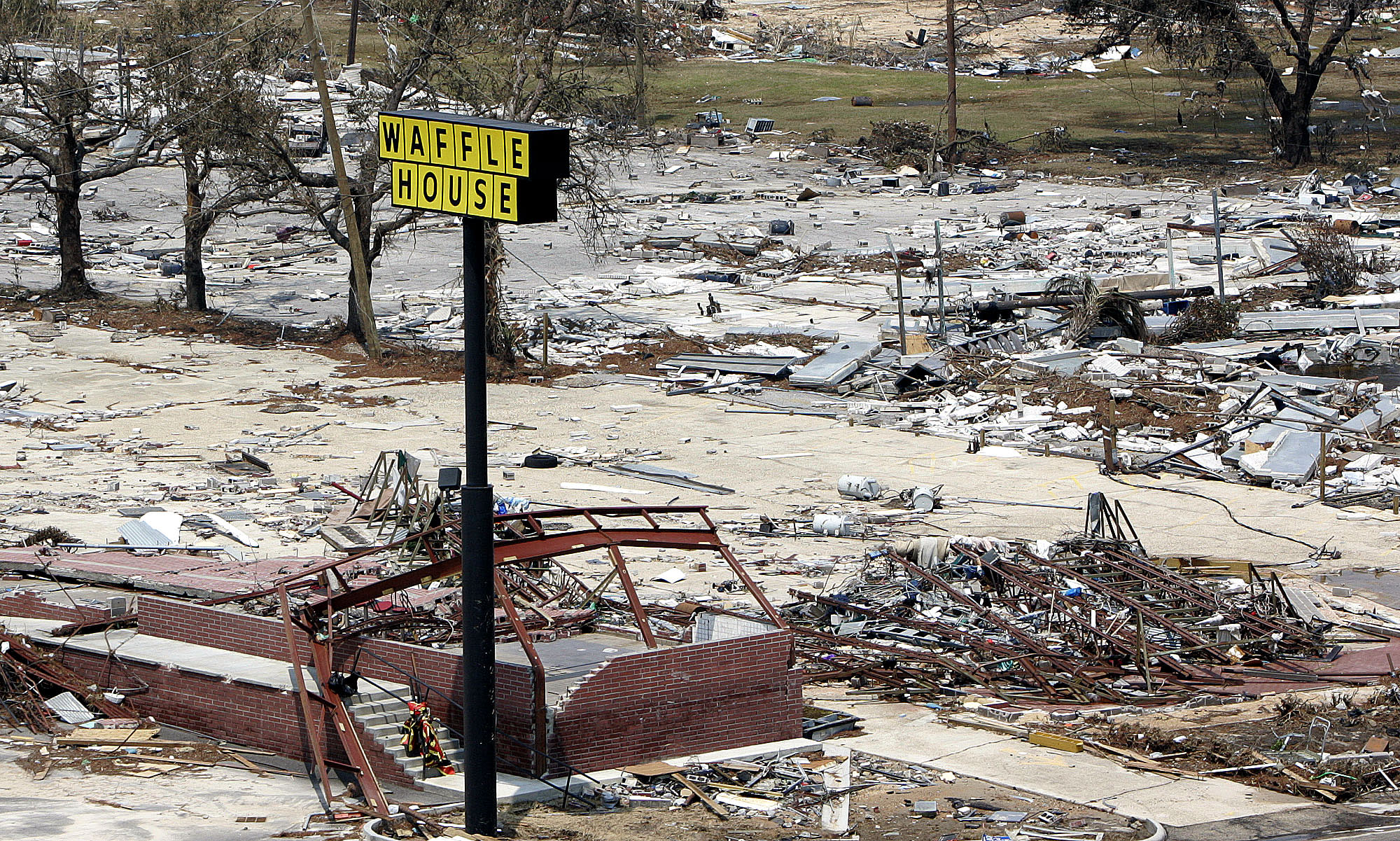 The day after 1996’s Hurricane Fran devastated Raleigh, the only place in town one could get a cup of coffee was the Hillsborough Street Waffle House. Now I know why. Waffle House engineers its restaurants to weather storms.

One of the ways the Federal Emergency Management Agency (FEMA) measures hurricane damage is by the Waffle House Index. Waffle House, a popular 24-hour fast food chain in the Southeast, has a unique ability to operate solely on gas if necessary, so a closed Waffle House is often tantamount to disaster.

And while we won’t know yet how Hurricane Harvey will fare on the index, the attitude at Waffle Houses across Texas has been calm. The company’s staff has been preparing for months.

“We have our own special disaster teams and generators waiting to be shipped,” said one Waffle House employee in Galveston, Tex. “We’re open up until the city makes us close, probably later on tonight. As soon as it’s over we’ll be right back open.”

Source: How Waffle House opens so fast after a hurricane

Apropos of nothing, today’s the 12th anniversary of Hurricane Fran raging ashore. Behold my beating a dead horse.

I found this great play-by-play of the storm from a local geek who was on the scene, Jesse Ferrell. Jesse continues to do some great weather blogging, now for Accuweather. Check out his site for great info on current storms.

A look at the calendar shows that an important anniversary is approaching. September 5th, 1996 was the night Hurricane Fran slammed ashore at Wilmington and took I-40 straight through Raleigh. Many were without power for a week or longer. Among downed trees and powerless apartments, I invited friends over for a hurricane party. That night we grilled food and partied under one of the clearest, deepest night skies I’ve ever seen.

September marks ten years. Its time for another hurricane party! We’re hosting a party at our house the afternoon and evening of Saturday, September 9th, when we’ll recreate hurricane conditions. There’ll be grilling, drinks and fun, but no lights! We’ll make an exception for air conditioning and refrigeration (wouldn’t want any ham to go bad). Oh, wind, rain, and falling trees aren’t anticipated, either.

So mark your calendars! Look for more details when we get closer. The wind is building . . .

Bonnie Charley and Frances have all been the warm-up acts. It’s time for the headliner. Hurricane Ivan is now a devastating category five hurricane, and overnight weather service models are beginning to predict a northerly turn – straight over the Florida penninsula. Maximum sustained winds are over 160 MPH. Incredible.

There’s still time before it hits land, and plenty of room for it to pick its landfall. Keep an “eye” on this one.

Hurricane Charley is about to rip up Central Florida. It is a category 4 hurricane with 145 MPH sustained winds and a pressure of 954 millibars. For comparision, Hurricane Fran was 954 millibars when it came ashore. Once it’s had its way with Central Florida, Charley could potentially hop into the Atlantic and bulldoze Myrtle Beach.

This is going to be a very destructive, very expensive storm.