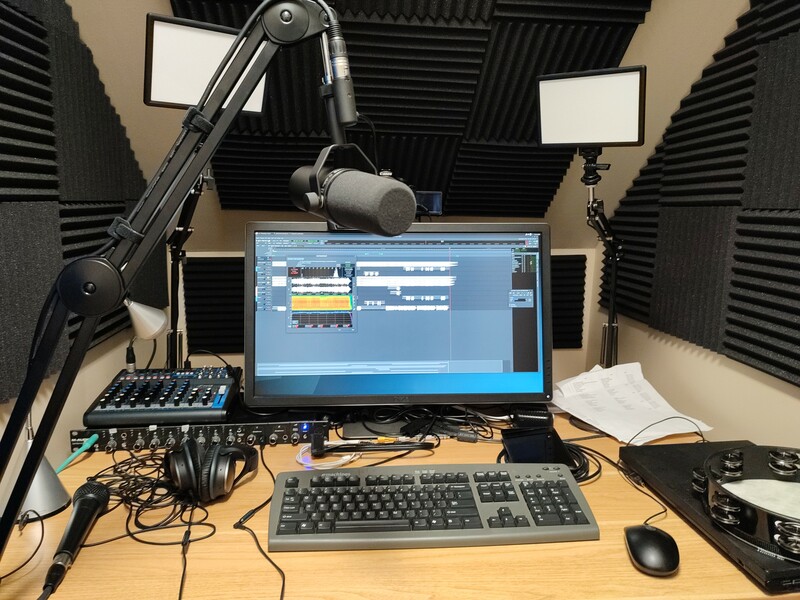 A side effect of my work on singing has been discovering what tools I need to sound decent. I started with a very good USB microphone a few years ago and then graduated to an inexpensive, 8-channel USB mixer board that I could use with some decent XLR mics I had lying around. When I got my current job, I went out and bought a top-of-the-line Shure SM7B microphone and paired it with my mixer, which got me even closer to the professional sound I wanted. Then I found a used digital sound card, an 8-channel Firewire-based M-Audio 2626 and bought it cheap.

Now, Firewire is essentially an abandoned technology now that Apple no longer ships systems with it, but it is still alive and well in Linux. I took one of my old desktop PCs out of storage, added a hard drive, installed Ubuntu Studio on it, and now have a digital audio workstation (DAW), for dirt cheap! Ubuntu Studio comes with a huge number of audio and video production tools and plugins. It works just fine with this very old M-Audio 2626, too.

My audio tool of choice for editing was once Audacity, but Ubuntu Studio comes with the open-source, ProTools-like DAW called Ardour. I’ve learned how to do some amazing things with manipulating audio using Ardour, simply by diving in and trying different things. I’m sure there is at last 200% more I can be doing with it when I fully understand its capabilities.

Over the past few days and nights, I’ve spent my free time using Ardour to recreate one of my favorite songs, R.E.M.’s These Days. I’ve often looked for old-school karaoke tracks for R.E.M. but there are few that aren’t the hits everyone’s heard a million times already. I did some Google searches to see if anyone’s done this themselves and hit pay dirt when I found a musician named Clive Butler. Clive posted several of his R.E.M. covers to Blogger from 2011-2018 and I thought I’d start with those. Then last week, I discovered he has fresh versions on his very own YouTube channel so I downloaded his version of These Days.
END_OF_DOCUMENT_TOKEN_TO_BE_REPLACED

As I mentioned previously, I’d taken my singing much more seriously over the last few years, practicing for hours each week to improve my technique. At the end of last year, I got good enough to post a few audio clips and videos on a bandmate-finding website called BandMix. It took about a week before a few bands reached out to me, interested to talk to me about fronting their bands. I said yes to one which was a new Creedence Clearwater Revival tribute band but we never rehearsed because of a surge in COVID at the time. I wound up leaving the band and it kind of broke up soon afterward. Then I got interest from a Beatles tribute band, too, but didn’t think the music was varied or interesting enough. Finally, a musician reached out who was interested in the same music I was – and it was across the gamut of styles. My interest was piqued!

In Beaufort, NC, tagging along on one of Kelly’s work trips at the end of December, I got a call from Chuck, the drummer, who proceeded to talk my ear off on all the stuff the band planned to play. A week later, I showed up at the practice space at Kit’s home and sang a few songs for him. He didn’t say much but his ear-to-ear grin told me all I needed to know. Thus, I became the frontman for DNR.

DNR is composed of veteran musicians, many with a decade or more experience playing in bands. As for me, this is my very first band. At our early rehearsals, held almost every Saturday morning, I found myself being stared at by my bandmates, waiting for me to take charge and get us playing. It took me a few beats (ha!) to learn how to actually lead a band, but basically I faked it until I figured out what I was doing. I never considered before how cool and powerful it feels to set this band (or any band) in motion. It’s not something I pondered when I was singing solo to karaoke tracks!

So we rehearsed and rehearsed, picked an interesting setlist, and missed various practices here and there due to vacations, COVID cases, and what have you. Finally, after months of hard work rehearsing, we held our first gig over the Memorial Day weekend: a surprise birthday party for Chuck’s wife, Claudia. There were about two dozen people in attendance and friendly faces at that, but re-watching the video I took I appreciate more and more how heartfelt the applause is that we earned.
END_OF_DOCUMENT_TOKEN_TO_BE_REPLACED