Had a dust-up on social media the other day and, frankly, I am still mystified how it all took place.

I tend to follow online and amplify veterans who lean left because the perception of the military consisting of only right-wingers needs to change. A tweet from one of the more popular veterans I follow attracted several good comments. I liked one from a particular veteran (we’ll call her Karen), checked her profile, and followed her when I saw we had something in common: our Navy occupations were in cryptography.

A few days later, she followed me back. I decided to say hi to her in a direct message: 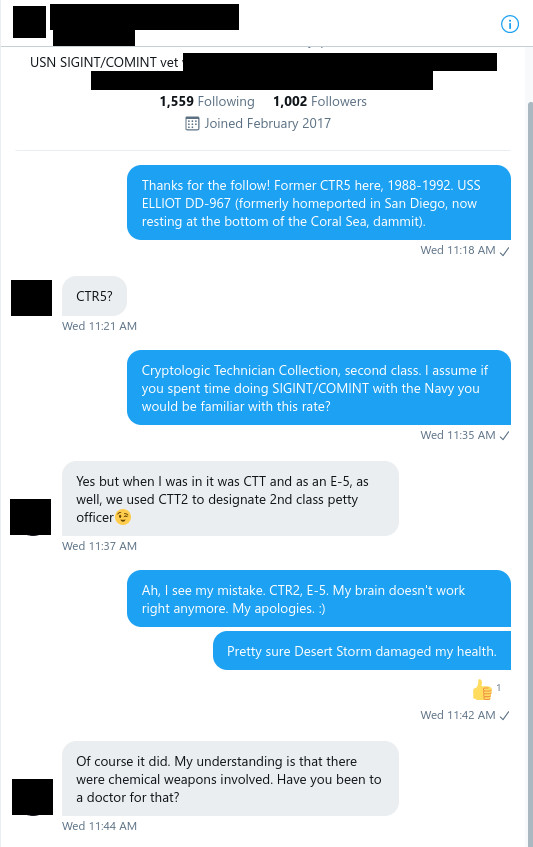 Well, because by brain is perpetually fried lately I goofed in how I specified my rank. I was a CTR2 rather than a CTR5, which – admittedly – doesn’t exist. A second class petty officer is an E-5. I got my numbers mixed up. It doesn’t help that I was juggling three other tasks for my day job and trying to get them done so I could grab lunch. It was an innocent typo. As you can see here, though, I owned up to my mistake and attributed it to my brain not working right anymore from Desert Storm.

I turned my attention away from Twitter and continued working, thinking that was the end of it. A few hours later, I opened Facebook to find that Karen had posted in a group of which we are both members, the Naval Security Group Activity (NSGA) group. Karen made fun of the guy on Twitter who couldn’t get his rate/rank straight, and you know, that was fair game. I responded in a comment that the person she was laughing at was me and that, yes, I had told her immediately that my brain doesn’t work right anymore. Two of my division shipmates weighed in to say I was indeed who I say I am and that her bullying needs to stop.

Now at this point, a functioning adult would have realized her mistake, admitted it, and perhaps offered an apology for not believing me. Karen chose to double-down instead, quizzing me about my health issues which I have shared some of here before but don’t feel like dragging out into the public all the time. Fine, I thought. I extended an olive branch to her in her Facebook post and was willing to move on.

A bit later, I happened to check Karen’s Twitter feed again. Karen had thoughtfully updated her Twitter friends with info from the NSGA thread, saying now she felt like an ass since I had included a photo of me with my division. Still, this apparently wasn’t enough proof get her to move on, much less apologize.

In the NSGA post, she had told me she didn’t name me in her original Twitter post. That is true enough – it wasn’t in her initial post – but it wasn’t long before she gleefully shared it with her followers, causing some of them to block me as well. Discovering this made me very angry. It’s one thing to anonymously laugh at my innocent mistake but to name me, even after being proven wrong?

Karen was proven wrong in a public forum and was chided for bullying me. Again, she could have been a functioning adult but instead dug in. Suddenly, her accusation changed from me claiming stolen valor to me faking my illness! On Twitter, she referenced the USS ELLIOT Wikipedia page and insinuated that because ELLIOT wasn’t present when missiles were flying, obviously I was making up my health issues.

First off, anyone who cites Wikipedia on anything is an idiot. Anyone can edit pages and rarely is anything there checked or edited. Secondly, I wrote about half of the USS ELLIOT Wikipedia page, including nearly all the details of the Westpac 90 and 91 deployments I was on. Thirdly, as the screenshot of our initial chat shows, I never told her I was in Desert Storm – the combat phase with fighting and all that. I simply said my health has not been tthis insanehe same since Desert Storm. My ship deployed to the Persian Gulf during the post-combat phase of Desert Storm, i.e. after the cease-fire. It was still a combat zone, full of stuff that could kill me, and I received combat pay for the three largely-boring months we did circles in the tiny Gulf.

Now, a layperson might think “well, how could he be injured then?” I admit that for the longest time, I doubted myself that I had Gulf War Illness. The fact is, though, my ship entered the Gulf at the height of the Gulf War’s environmental disaster. Thousands of well heads had been set on fire by retreating Iraqi troops, filling the skies with black oil smoke. This smoke followed the prevailing winds and blanketed the Gulf, turning noon into twilight. I have photos and video of us escorting a tanker north to a Kuwaiti terminal and the sky is filled with smoke. In hindsight, I wish I had stayed below decks as I was on the midwatch at the time and only woke up because our captain decided to play tour guide with the 1MC and woke everybody up. I have since wondered if I had stayed inside during that time, maybe my health would be better now.

The oil smoke particles weren’t the only particulates I was breathing in. Extra-fine sand gets carried by the desert wind and can cause silicosis. When topside I would occasionally I had a bandanna over my face but not all the time.

Then there was the nerve gas. I had known that chemical weapons alarms had gone off during the war. I read something afterward that speculated that some of this gas had been released at the wellheads along with the smoke. Now, I don’t know if that is true – and I have strong doubts about it – but I have read that even exposure to tiny amounts of nerve gas is enough to cause permanent damage. I can’t rule it out.

Next, there were the numerous vaccinations we were all required to get. Malaria shots were required, of course, but also an experimental Anthrax vaccine. Some were issued PB pills but I don’t believe I had to take those. At any rate, I was stupid and misplaced my shot card so I am not sure what got put into my body. My service records don’t show much, either.

Finally, there is depleted uranium. Depleted Uranium (DU) is an exceptionally-hard metal which is used as an anti-armor projectile. I was not a gunner’s mate but I was around depleted uranium a few times. As a ship’s photographer, I snapped photos of the DU rounds that were used in our Close-In Weapons System (CWIS), an R2D2-looking system designed to down incoming missiles. Not only that, I have photographed the CWIS in action as it chewed through hundreds of DU rounds during its tests. I absolutely have breathed in dust containing depleted uranium.

All of this to say, while no one may have been actively trying to kill us (save for a floating Iraqi mine), I have plenty of reason to suspect my current health issues are Gulf War-related.

But I shouldn’t have to go into all of that, right? Karen should have been able to take my word on it. I said right from the start that I have health issues. And, hell, my blog URL is part of my Twitter profile. She could’ve searched here for the numerous posts I’ve written about my health, my service, and the Gulf War.

At this point I was incensed.

I weighed in on one of Karen’s Twitter threads about USS ELLIOT. Was I condescending? Fuck yes, I was! I was pissed. She had posted fighting words and continued to post them but left me no way to respond. In hindsight this wasn’t my best move because Karen had been the bully thoughout this episode but now I had given her the cover to claim victimhood.

My posting ticked off some of her followers who then unloaded on me. I traded posts with one of them, mentioning the many shipmates with which I served who met untimely deaths. He quoted to me the text I had written myself on the USS ELLIOT Wikipedia page and that backfired on him.

Rather than continue to talk past each other, I offered to have a video chat with him. I had planned to set up a Zoom call where I would answer any questions he had. He was not brave enough to take me up on the offer, though, so as far as I am concerned he and Karen’s friends aren’t really interested in the truth. I am done engaging them now.

So, what has this episode taught me?

1. Always stand up for your good name, no matter what the cost.
2. I am at my core always willing to poke the bear, even if poking the bear is not in my best interests.
3. There are a surprising number of adults who have never learned the value of admitting when they’re wrong. There are people who won’t change their minds even when presented with a mountain of evidence.
4. Not all sailors are shipmates, even ones who did the same things you did.
5. It’s okay to piss people off, especially if they have it coming. I don’t need everyone to be my friend. This is hard one for me to accept but it’s true. As someone said, “you are the villain in someone else’s story.” So be it.
6. Value the people who do have your back. I am grateful for the friends who stood with me.

I requested that the NSGA group post be removed and it was, thankfully. The Twitter stigma remains, however. Social media is great until it isn’t, I guess, and expecting to have a worthwhile conversation with total strangers on the Internet is an impossibly high bar.

Now, on to other things!

Update 16:02: Hi folks! If you want to learn more about my super-fun experiences with GWI, check these posts here and also here and here, especially. Keep in mind that these are only a very small sample of the episodes that I’ve had. You might uncover some I’ve missed here with a search of my blog’s Health category.