The start of the fateful sledding run

I spent this past week at the Veterans Administration’s War-Related Illnesses and Injuries Center (WRIISC), getting examined to figure out the strange health issues I’ve had since leaving the Navy (more on that later).

One issue I discussed with them has bothered me for the past few years.I’ve had a numbness that has developed along my right quadricep. It’s icy-cold sensation can wake me from a deep sleep and is quite aggravating. They asked me if I could recall any injury I may have had to my lower back.

At the time I could think of none. but when pondering it this morning the answer came to me and it is decidedly not war-related. Instead, it’s the long-delayed consequences from an injury I received from snow sledding with the family.

In late January of 2014, Raleigh was blanketed in a snow that proved perfect for sledding. After breakfast, the family bundled up and headed to our favorite sledding spot in Lions Park. Gleefully, we raced down the back hill towards the tennis courts parking lot. On one run, however, I raced Hallie down the hill while I was sitting on our green plastic dish sled. At the bottom of the hill, I plowed into a landscape timber at full speed, sending me airborne momentarily. 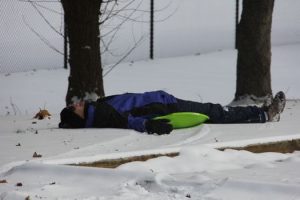 This is not a happy face.

Fuck, it hurt. Worst pain I ever had. I could do nothing but lie there, too hurt to move, and cursing a blue streak. It took me several minutes to be able to pick myself up.

My sledding was over for the day. I soon hobbled home down icy streets and rested.

Eventually the pain went away. I seemed to suffer no lasting effects until a few years ago when the numbness began spreading along my leg. Recent MRIs showed the damage to my spine but until this morning I had never made the connection to my sledding accident.

While that may seem counter-intuitive, it really says that we are here on Earth to use our bodies. Scrapes, scars, and bruises are badges of honor – proof that we are using our bodies and truly living!

While I would prefer not to be dealing with nerve issues today, at least I know now that I earned this particular injury on a day that was otherwise full of very happy moments spent with my family.