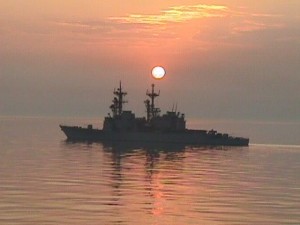 John Steinbeck spent a few weeks aboard a destroyer in World War II, the USS Knight (DD-663), and wrote this ode to destroyers called “A Destroyer” in 1943. It appeared in a collection of his dispatches published in 1958 in a book called Once There Was a War.

I think it sums up life on a destroyer quite well.

A destroyer is a lovely ship, probably the nicest fighting ship of all. Battleships are a little like steel cities or great factories of destruction. Aircraft carriers are floating flying fields. Even cruisers are big pieces of machinery, but a destroyer is all boat. In the beautiful clean lines of her, in her speed and roughness, in her curious gallantry, she is completely a ship, in the old sense.

For one thing, a destroyer is small enough so that her captain knows his whole crew personally, knows all about each one as a person, his first name and his children and the trouble he has been in and is capable of getting into. There is an ease on a destroyer that is good and a good relationship among the men. Then if she has a good captain you have something really worth serving on.

The battleships are held back for a killing blow, and such a blow sometimes happens only once in a war. The cruisers go in second, but the destroyers work all the time. They are probably the busiest ships of a fleet. In a major engagement, they do the scouting and make the first contact. They convoy, they run to every fight. Wherever there is a mess, the destroyers run first. They are not lordly like the battleships and the men who work them are seamen. In rough weather they are rough, honestly and violently rough.

A destroyerman is never bored in wartime, for a destroyer is a seaman’s ship. She can get under way at the drop of a hat. The water under fantail boils like a Niagara. She will go rippling along at thirty-five knots with the spray sheeting over her and she will turn and fight and run, drop depth charges, bombard, and ram. She is expendable and dangerous. And because she is all these things, a destroyer’s crew is passionately possessive. Every man knows his ship, every inch of it, not just his own station.

The destroyer X is just such a ship. She has done many thousands of miles since the war started. She has been bombed and torpedoes have gone under her bow. She has convoyed and fought. Her captain is a young, dark-haired man and his executive officer looks like a blond undergraduate. The ship is immaculate. The engines are polished and painted and shined.

She is a fairly new ship, the X, commissioned fifteen months ago. She bombarded at Casablanca and GeIa and Salerno and she has captured islands. Her officers naturally would like to go to larger ships because there is more rank to be had on them, but no destroyerman would rather sail on anything else.

The destroyer X is a personal ship and a personality. She is worked quietly. No one ever raises his voice. The captain is soft-spoken and so is everyone else. Orders are given in the same low tone as requests for salt in the wardroom. The discipline is exact and punctilious but it seems to be almost mutually enforced, not from above. The captain will say, “So many men have shore leave. The first man who comes back drunk removes shore liberty for everyone.” It is very simple. The crew would discipline anyone who jeopardized the liberty of the whole ship. So they come back in good shape and on time. The X has very few brig cases.

When the X is in a combat area she never relaxes. The men sleep in their clothes. The irritating blatting sound which means “action stations” is designed to break through sleep. It sounds like the braying of some metallic mule, and the reaction to it is instant. There is a scurrying of feet in the passageways and the clatter of feet on the ladders and in a few seconds the X is bristling with manned and waiting guns, AAs that peer at the sky and the five-inch guns which can fire at the sky too.

The crouched and helmeted men can get to their stations in less than a minute. There is no hurry or fuss. They have done it hundreds of times. And then a soft-spoken word from the bridge into a telephone will turn the X into a fire-breathing dragon. She can throw tons of steel in a very short time.

One of the strangest things is to see her big guns when they go on automatic control. They are aimed and fired from the bridge. The turret and the guns have been heavy dead metal and suddenly they become alive. The turret whips around but it is the guns themselves that seem to live. They balance and quiver almost as though they were sniffing the air. They tremble like the antennae of an insect, listening or smelling the target. Suddenly they set and instantly there is a belch of sound and the shells float away. The tracers seem to float interminably before they hit. And before the shells have struck, the guns are trembling and reaching again. They are like rattlesnakes poising to strike, and they really do seem to be alive. It is a frightening thing to see.