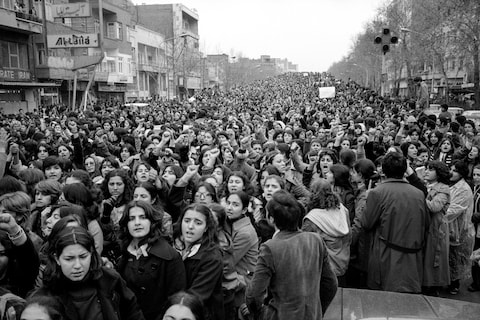 I was reminded again of this story, where in 1979 100,000 Iranian women took to the streets to protest the repressive ways of the Iranian Revolution on women. Perhaps one day Iranian women will regain the rights they lost in this sorry episode.

Iranian photographer Hengameh Golestan was married to the award-winning Iranian photojournalist Kaveh Golestan, who died while on assignment in Iraqi Kurdistan, in 2003.

Hengameh took her first images aged 18, and for a brief time attended photography school in England, but learnt most about taking pictures from working as her husband’s assistant. “To say that working with Kaveh was inspiring would be an understatement,” she says. “He was always critiquing my work and offering advice to help me improve. Technically and also spiritually I got everything from him.”

Hengameh liked to photograph everyday life in her home city of Tehran, in particular the lives of women and children, and quiet, often mundane domestic details. But in 1979, when she was 27, revolution came. In January, following two years of demonstrations, the last Persian monarch – the Shah – left Iran for exile. In Feburary, Ayatollah Khomeini returned to the city, bringing about the final collapse of the royal reign and a new Islamic Republic.

“It was the best time of my life,” says Golestan. “I was in the streets from morning until night as something was always happening. Every day was so unpredictable. The mood was one of anticipation and excitement, and a bit of fear. We were actively taking part in shaping our future through actions rather than words and that felt amazing.”