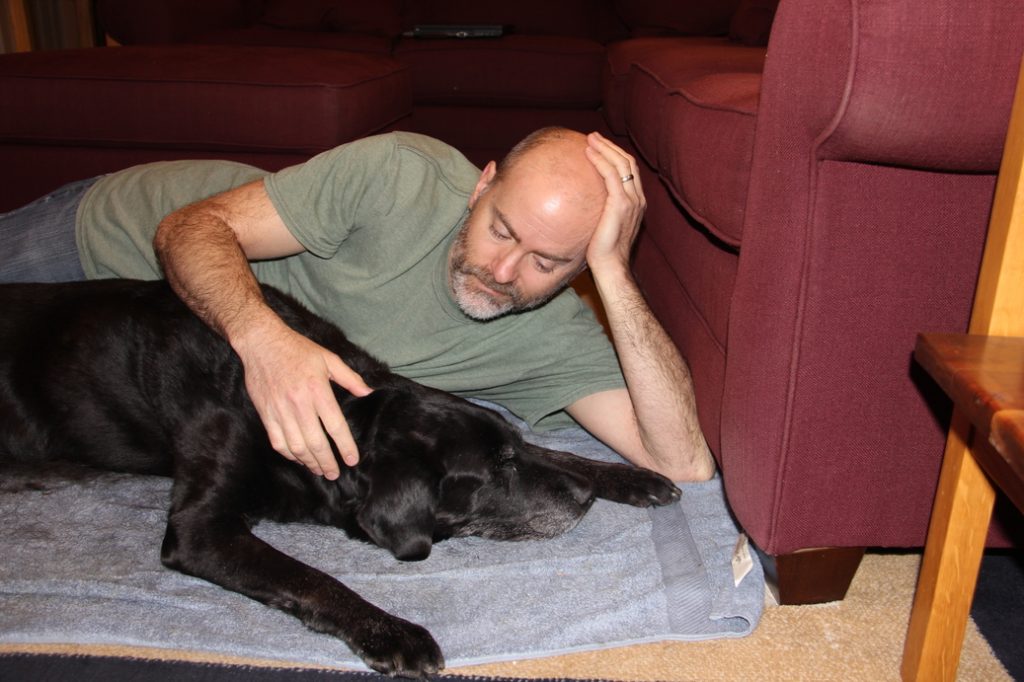 The last photo of Rocket

“Now he belongs to the ages.”

Such was the quote of Edward Stanton upon the death of Abraham Lincoln. While my dog Rocket was not Abraham Lincoln, I could not help but think that he, too, now belongs to the ages. He died around 8:35 PM last night, surrounded by his Turner pack.

The veterinarian, Dr. Janelle Fenlason from Azure Holland Mobile Veterinary Services, showed up about 15 minutes early to our 8:30 PM appointment. This was added some pain for me as it meant there was less time left to spend with Rocket. Kelly hurriedly gathered the kids so they could have some time with him before the vet arrived. I offered to snap their photos with Rocket but the idea wasn’t well received. I didn’t care because I wanted a photo of myself with him before he was gone.

After more tears were cried and several last dog snacks were shoveled into Rocket’s mouth, I summoned Dr. Fenlason over to our group. She instructed us to distract Rocket while she administered the sedative into his back. Rocket didn’t even notice the needle as he fished a few more snacks out of Travis’s hand.

Within minutes he was dozy, resting his head on alternating paws. Soon his breathing became deep and Dr. Fenlason’s tickling of his hind leg didn’t stir him. She placed a tourniquet around his right leg, shaved off a spot on his shin, and inserted a catheter. I asked the family if they were ready and no one volunteered that they were, though no one protested, either.

through teary eyes, I gave a nod to Dr. Fenlason and she pumped the final dose into Rocket’s leg. His gentle, rhythmic breathing became shallow after a minute, with several rapid breaths as his heart stopped. Then he exhaled one last time as Kelly, Travis, and I cried softly and Hallie looked on from the couch.

“He’s gone,” Dr. Fenlason said quietly as the removed the stethoscope from his chest.

After a moment of shared silence, Dr. Fenlason returned to her car and brought back an animal stretcher. We positioned it behind Rocket’s lifeless body while she lifted his backside onto it and I lifted his chest. She covered him with a blanket and buckled the stretcher’s straps from back to front, leaving his head exposed for one last head scratch and kiss. Then she covered his head and we both walked him back to her car.

There was one last chance to pat him before Dr. Fenlason closed the hatch on her car.

“Hug?” she asked as she walked up to me. I gave her a hug and thanked her.

As the vet pulled away into the night, Travis tightly hugged Kelly and I joined in, followed by Hallie.

“Wave your legs!” Kelly blurted out, and we waved our legs in our “whole body-wave” way we traditionally do whenever Kelly’s parents are leaving our home.

We returned silently to the house, a bit in shock at what we had witnessed. Within minutes, Kelly had returned the last vestiges of Rocket’s things to the washing machine or to storage. I was not quite ready to see it all go but I suppose it is her way of grieving.

She and Hallie then retreated upstairs to watch a movie. Travis took a long shower, and I turned to Facebook to take solace in the comforting thoughts shared by my friends.

In hindsight I should have just stayed awake as I was completely wired and in little mood for sleep. There is nothing that sharpens one’s focus quite like staring at the imminent death of a loved one. I opted not to photograph or film the process because I wanted to be present for Rocket, and I surely was.

So I write this at 10 AM the following day, having awakened earlier than normal due to my restless night. The house was eerily quiet as the sun crept up. There was no dog rustling around in the next room, shaking his head as if to say “it’s time to wake!” Rocket would always be his happiest the first thing in the morning, always giving us a warm hello. And it wasn’t just because his belly needed filling.

Rocket’s joy was a daily reminder that a new day offers the hope and chance for adventure. For love. And just being happy to simply be. These are lessons I will keep in my heart forever.