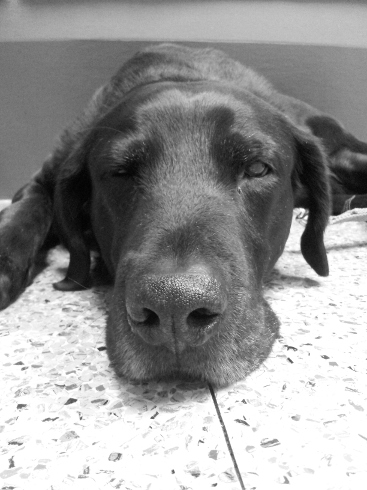 Rocket in 2014. One of my favorite pictures of him.

He’s been in decline over the past few months and took a sharp turn for the worse over the last two days. A few months ago we noticed an occasional drop of blood in his saliva. A trip to the vet found a large mass on the back of his tongue – possibly cancer. Yet while he was bleeding all over the veterinary exam room he was bounding all around, quite happily begging for more treats. Upon hearing the tumor was inoperable, Kelly and I realized we were looking at an indefinite amount of time where we would be essentially providing Rocket hospice care, cleaning up his bloody drips and making him as comfortable as we can. So, we covered our den floor with old towels, set up his dog crate in the middle of the room, and did the best we could.

Things seemed manageable until yesterday morning when Rocket struggled to lift himself off the floor. When Kelly took him out front for a bathroom break he staggered around, not knowing where he was or what he should be doing. He spent the rest of the day sleeping in the exact same spot on the floor, never budging for anything.

Suppertime rolled around and he gingerly stood up with my help and stared for the longest time at his food dish, twenty feet away across our hardwood floor. Rocket could not even keep his legs underneath him as he slowly made his way to his dish. Once there, he slowly ate the rest of his breakfast food and a little additional I provided him and then he drank some of his water. Once again, half his food was left behind – an astounding event for a dog who normally emptied his food dish within 90 seconds. The implications were clear to us.

Around that time I hauled him up to take him outside again. For several minutes he stared at the threshold of the open door, unable or unwilling to take a step out (again, highly unusual). A bit of prompting got him outside, where he stepped down the stair-ramp like a champ and stood to pee. Once that was done he refused the trip back up the ramp. His legs gave out (or his stubbornness reasserted itself, I’m not sure which) and he plopped down at the base of the stairs, startling the cat who didn’t know what to make of it. I let him rest there for a little while until the 30-degree cold became too much for me after which he slowly worked his way up the stairs and into the house. 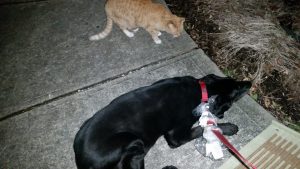 Kelly and I knew we’d have to make a decision soon. Our regular vet had closed for the day but suggested a mobile vet who could put pets down in their homes. We hemmed and hawed about making an appointment for Saturday (today) but I urged us to wait and see how he acted today.

Today, not much better. He stayed in the same spot all night, his legs splayed out in all directions. He made an effort to rise but only his right hind leg appeared to have any strength.He could not even stand up. Kelly and I had to pick him entirely off the floor and out to the front yard to get him to pee. Once back inside, a bowl of food placed in front of him was politely ignored.

It is time. It is so obviously time.

When we had the first scare months ago, thinking he was leaving us, we were relieved when he bounced back within days, bleeding but moving on his own and obviously still happy. There appears to be no bouncing back this time and now we wonder if we’ve waited too long.

I have wondered when I would know when it was time. Friends suggested “you’ll just know,” which was attempting to be helpful but wasn’t really. Now I do know how I would know: It is time when I don’t feel a shred of guilt in making the decision.

And we’re at that point now. So, the call’s been made. The appointment’s been set for 8:30 this evening. We’ll say our goodbyes here in our home while the vet administers two shots: one to put Rocket to sleep and a follow-on shot to stop his heart.

Though he’s clearly in pain and it’s the right thing to do, it won’t be easy saying goodbye to this loving member of our family. Since blogging is my therapy you will hear more of this in the hours and days ahead.

Any hugs you can send our way will be greatly appreciated.