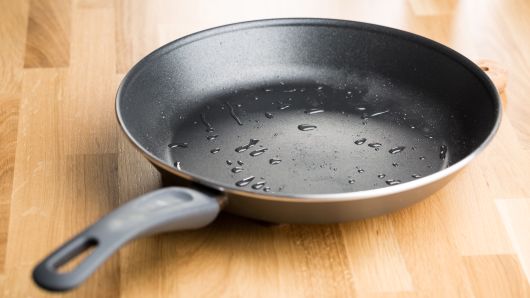 Great investigation by ProPublica into the dangers of Teflon and Scotchgard.

The chemicals once seemed near magical, able to repel water, oil and stains.

By the 1970s, DuPont and 3M had used them to develop Teflon and Scotchgard, and they slipped into an array of everyday products, from gum wrappers to sofas to frying pans to carpets. Known as perfluoroalkyl substances, or PFAS, they were a boon to the military, too, which used them in foam that snuffed out explosive oil and fuel fires.

It’s long been known that, in certain concentrations, the compounds could be dangerous if they got into water or if people breathed dust or ate food that contained them. Tests showed they accumulated in the blood of chemical factory workers and residents living nearby, and studies linked some of the chemicals to cancers and birth defects.

Now two new analyses of drinking water data and the science used to analyze it make clear the Environmental Protection Agency and the Department of Defense have downplayed the public threat posed by these chemicals. Far more people have likely been exposed to dangerous levels of them than has previously been reported because contamination from them is more widespread than has ever been officially acknowledged.

Source: How the EPA and the Pentagon downplayed a growing toxic threat