As usual, I’ve had a ton of irons in the fire, squeezing as much out of the waning summertime days as I can. That hasn’t left much time nor inspiration for blogging but I’m hoping to get back on track with this.

Major stuff I’ve been doing around in my free time includes replacing the falling-apart wooden steps on my back deck with composite decking. This project took two sweltering Saturdays to complete but I’m very pleased with how the steps came out. Next up is the deck surface itself which, frankly, will be easier than the steps since there’s far less cutting needed. After that I’ll have to dream up a good plan for replacing the wooden railing but I’ve got a little time to figure that out.

I hope the whole project will be done by fall. Then I’ll combine the scrap wood from my deck with the scrap fencing from my fence job and haul it all away for a clean yard again. Yay! 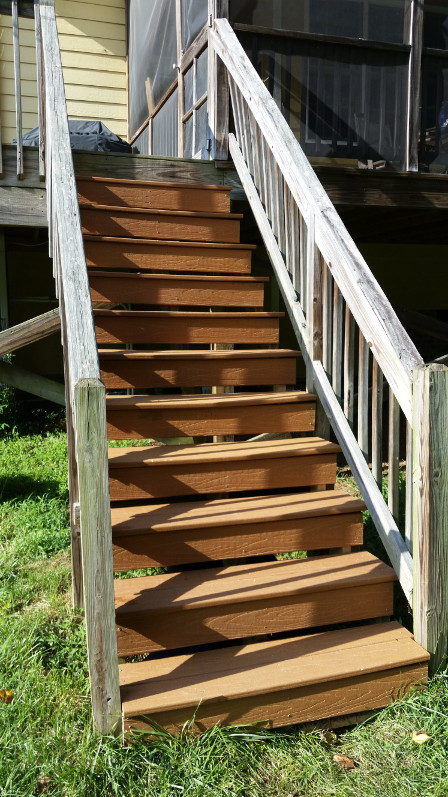 One step at a time

Kelly and I have also been working on plans to finish our attic space. This has turned out to be some work, simply deciding what we want, how much we are willing to spend on it, and who we want to do the work. We hope we’re close to kicking this off but there are several more decisions to make.

Earlier this summer I took home my in-laws’ video camera to digitize their videos (which are mostly of our kids). After working through their tapes, I dusted off my own – several of which are in the old Hi8 analog format. Sadly, there is only one way to digitize tapes and that’s in real-time. Thus, I’ve been going by my laptop and changing tapes whenever I can. I’ve filled up one 2 TB drive with my video and I have dozens more tapes to go. It’s been a blast seeing all these old happy scenes, though, and it inspired me to go and purchase a digital camcorder. Yeah, I know you’re wondering who actually would buy a digital camcorder these days but I’m a stickler for good lenses and smartphones just ain’t there yet.

Back in February I decided I needed to put Debian Linux on my Seagate Business NAS. That was a several-hour effort but well worth it to give new life to this great piece of hardware. I learned about embedded systems and how to tap into the UART of hardware to get it to do my bidding. All very useful stuff.

I’ve also tried to catch up on reading, some of the in-depth analysis of current affairs (such as they are) and some non-fiction. After reading the biography of Ulysses S. Grant earlier this year I’ve been a popular user of Wake County Library’s Interlibrary Loan, so much so that I’m practically on a first-name basis with them.

My interests have been the goings on of the espionage world, with Russian election hacking and the like. I read a great account of the post-Cold-War race to secure the Soviet Union’s weapons of mass destruction after that country collapsed. Called “The Dead Hand,” and written by David E. Hoffman, it uncovers the extraordinary lengths American intelligence (sometimes in cooperation with Russian intelligence) went to to keep all kinds of nasty weapons out of the hands of terrorists. Particularly eye-opening was the Soviet’s massive chemical weapons effort, churning out illegal pathogens for an attack that never came. Some of these deadly substances have recently resurfaced in the suspicious attacks on ex-Soviet agents that have recently occurred in Great Britain.

I checked out an e-book version of a Vladimir Putin biography and have been working through that when I saw mention of another book about the history of Soviet spying. Called “The Haunted Wood” by Allen Weinstein and Alexander Vassiliev, it is an in-depth look at how the KGB and GRU has done business throughout their existence. Weinstein and Vassiliev gained access to the files of these organizations during that brief time in the early 1990s when it actually looked like the U.S. and Russia might learn to get along. It’s fascinating stuff.

Both the Putin biography and the Russian spying books have taken a back seat to a book hot off the presses – “Valley of Genius” by Adam Fisher. VoG is a detailed history of Silicon Valley straight from the techies who built it. It’s got lots of juicy gossip in it but more than that, it helps fill in a picture I’ve had of the Valley but never fully appreciated. If you have a career in tech, you owe it to yourself to read Fisher’s book and familiarize yourself with the amazing people who built our modern world.

Lastly, I’ve been working to tune my home network to its fastest possible speed. I continue to adore my Ubiquiti EdgeRouter Lite 3 (ERL-3), and have recently solved a configuration problem that vexed me for over a year.

Life is moving quickly but it’s all good. Well, most of it is good, but I’m making the most of whatever has come my way. That’s all anyone can hope for, isn’t it?