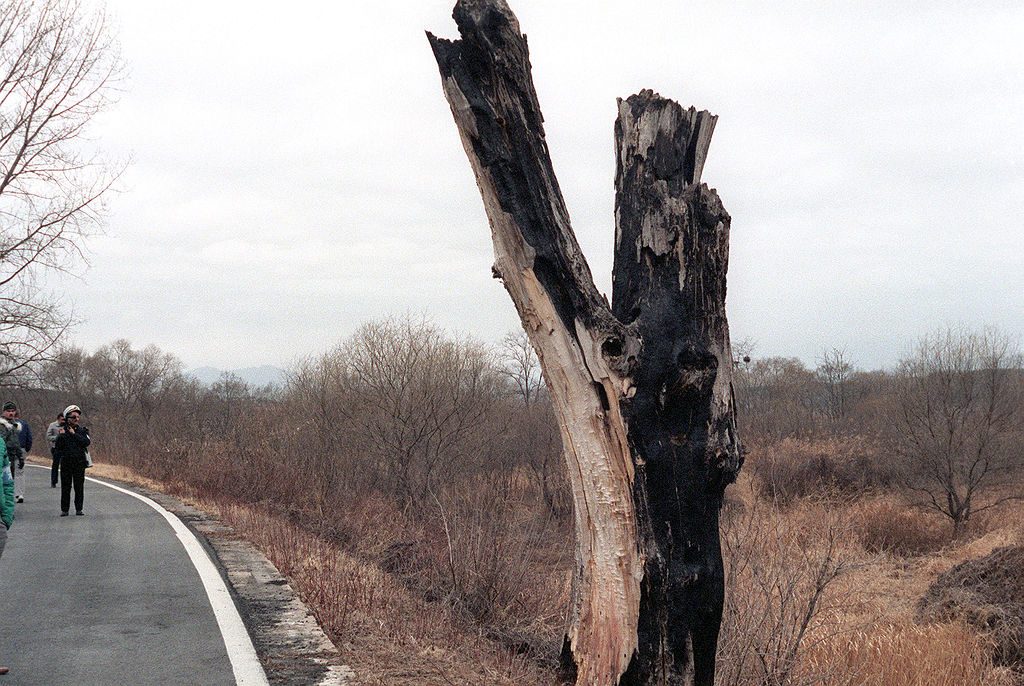 The tree involved with the Korean Axe Murder Incident

Talk is in the air that North and South Korea may finally sign a peace agreement that will officially end the Korean War. The guns mostly went silent with the 1953 signing of the Korean Armistice, but there were still outbursts of violence, such as the Korean Axe Murder Incident of 1976.

The Korean Axe Murder Incident began on August 18, 1976 when United Nations Command (UNC) forces (consisting of U.S. Army and Republic of Korea [ROK] troops) identified a poplar tree in the Korean Joint Security Area (JSA) of the DMZ that blocked the view in the summertime of a UNC checkpoint (CP No. 3) from a UNC observation post (OP No. 5). A work party of UNC soldiers, led by U.S. Army CPT Arthur Bonifas and USA 1LT Mark Barrett, was organized to trim the tree using axes and other tools.

This prompted a response from North Korean soldiers. A group of 15 North Korean soldiers led by a notoriously confrontational officer, Senior Lt. Pak Chul, tried to intervene, with Chul claiming the tree was planted by North Korean founder Kim Il Sung himself. The UNC troops promptly ignored Chul and his troops and returned to trimming when Chul ordered his men to kill them. In a skirmish lasting less than 30 seconds, Chul’s men killed Bonifas with one of the working party’s axes and then fled. Barrett managed to escape the initial attack and hid in a nearby depression but UNC forces did not notice he was missing until after North Korean troops had found him and also killed him with an axe.

These brutal murders demanded a response from U.S. and ROK forces, who put on an overwhelming show of force in response dubbed “Operation Paul Bunyan.” Heavily-armed ROK and USA soldiers returned August 21st to finish the job, backed up by special forces troops, tanks, dozens of helicopters, gunships, fighter planes, and bombers including a B-52 Stratofortress and several F-111s. Bases all over Asia were mobilized and the USS Midway aircraft carrier was stationed nearby. The defense condition was raised to DEFCON 3, demolition systems were armed for the DMZ’s Freedom Bridge and buildings on bases near the DMZ, and 12,000 additional troops were ordered to Korea.

Operation Paul Bunyon engineers of the U.S. Army arrived and promptly began work on the tree, taking it down to a stump in 42 minutes. Two hundred North Korean troops responded and were able to set up two machine gun posts but in the face of overwhelming force they could only watch silently as the tree was felled. Later that day, North Korean leader Kim II Sung expressed regret for the incident and urged that measures be taken to prevent incidents in the future. It is said to be one of the first times North Korea accepted responsibility for violence.

The tree stump remained as a memorial until 1987, when it was replaced with a brass plaque. The U.S. Army’s advance camp in the JSA was renamed Camp Bonifas in honor of Captain Bonifas. Also, the commander of the Eighth United States Army, General William H. Livesay, carried a swagger stick made from the wood of the poplar tree, passing it to the next commander as a reminder of the danger they face guarding the North Korean border.

Read more about the Korean Axe Murder Incident on Wikipedia.