I was reading this New York Magazine article about how the pioneers of the Internet were apologizing for what it has become, nevermind that many of the “pioneers” they mentioned were Johnny-come-latelys in comparison to the actual beginning of the Internet.

NYMag’s story did feature two actual pioneers, though computer pioneers more than Internet ones: Steve Wozniak and Steve Jobs. They included this photo and captioned it “Steve Jobs (left) in his parents’ garage in 1976, working on the first Apple computer with Steve Wozniak.”

There are a few problems with this photo and caption. First off, the photo is backwards. If you switch the photo to the proper orientation, you’ll be able to read that the text on the computer under Wozniak’s hand reads “Apple II.”

This brings us to the second issue with this photo and caption: it is not the first Apple computer (the “II” thing kinda gives this away). Apple’s first computer, the Apple I, did not come with a keyboard nor case. It was essentially a circuit board.

Was this photo really taken in the garage of Jobs’s parents? Wozniak has said that the whole garage thing is a myth and that no testing or production ever took place there. The photo shows a very neat-looking workspace with a workbench. According to what’s said to be the first news story on Apple Computer, the Steves were still working out of the Jobs garage when the article was written.

Many sources claim the photo dates from 1976. The fact that the Apple II is shown probably puts it in late 1976 at best if this is actually the year it was taken, but I’m guessing it was actually later because the II wasn’t released until June 1977.

Jobs and Wozniak are obviously just posing here because there’s no monitor connected to the computer Woz is typing on and Jobs is shown looking at an oscilloscope, which he most likely didn’t know how to use.

It’s possible Apple itself is responsible for the wrong date. This Business Insider story on the aforementioned first press article is illustrated with a photo said to be a press handout photo from Apple Computer: 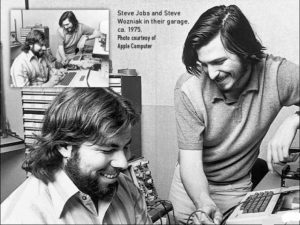 Steve Wozniak and Steve Jobs pose with the Apple II

The problem with these errors is that media like Business Insider, Slate, and others will take these bogus dates and descriptions and run them, never bothering to check to see if they’re legit.