What if I could locate them, then what? I’d like to try to collect whatever telemetry is being broadcast, even if it’s just beeps. Better yet, I could capture the data stream from the Internet side but that would be challenging to do anything with as it’s said to be encrypted. The birds do have imagery capability. What if I could tune into that and download an image snapped from orbit? Wouldn’t that be cool!

I have found some interesting blog posts and news stories which give some technical information. Gunter’s Space Page also has physical characteristics of the TinTin satellites, which apparently weigh only 400kg:

The primary structure for the Microsat-2a and -2b test spacecraft will be a box design measuring 1.1 m × 0.7 m × 0.7 m and carries the spacecraft flight computer, power system components, attitude determination and control components, propulsion components, GPS receiver, and broadband, telemetry, and command receivers and transmitters. The primary bus is mounted on the payload truss system, which also carries communications panels, inter-satellite optical link transmitters and receivers, star trackers, and a telemetry antenna. There are two 2 m × 8 m solar panels. Each demonstration spacecraft has a total mass of approximately 400 kg. The attitude of each spacecraft is 3-axis stabilized, and is dynamically controlled over each orbit to maintain attitude position for two pointing modes of operation: broadband antenna (antennas to nadir for testing) and solar array (solar arrays facing sun for charging). Power is provided by solar panels designed to deliver sufficient power at the predicted end of spacecraft life to not impair any test objectives. The Thermal Control System ensures that components are kept within operational temperature ranges. 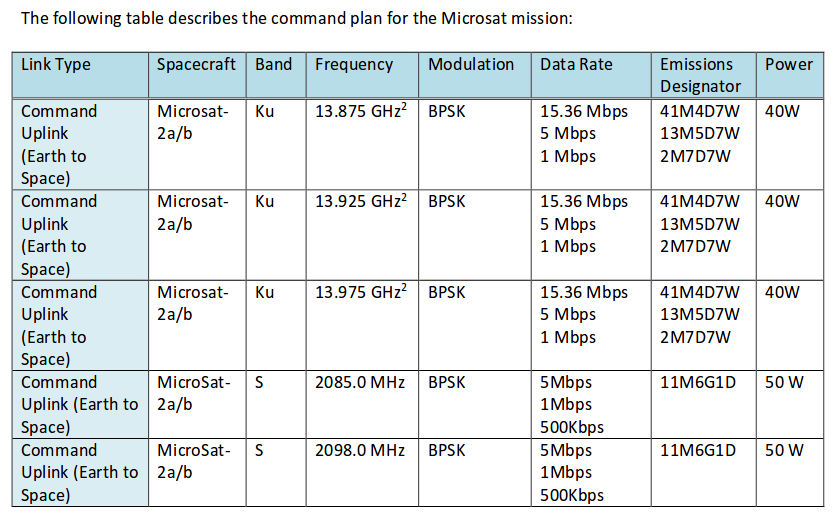 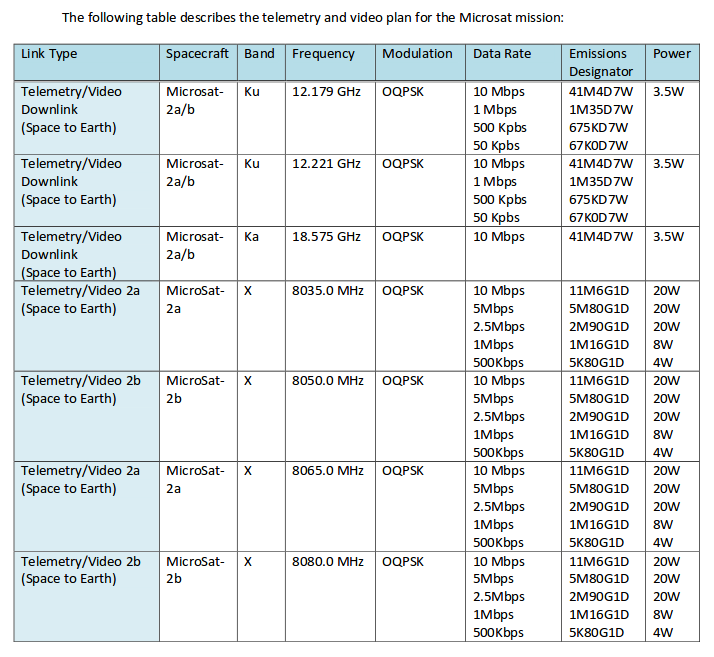 And last but not least, here’s the broadband bandplan:

Looking at the frequencies above there doesn’t appear to be too much that would be out of reach for a hobbyist like me. The 2GHz control links certainly are within the range of an RTLSDR, though they might need an amplifier. As for the other frequencies, we’re looking at a ton of cable loss at these extremely-high GHz frequencies, though with a proper LNB it could be done.

So let me do some more sleuthing to locate these orbits, firstly, and then figure out what information they might give up. Fun stuff!