Facebook’s algorithms seem to have pegged me as a conservative, which I find amusing but also useful. I get to view ads that have absolutely no relevance to me yet prove to be an insightful look at what kind of red meat right-wing organizations are feeding their gullible followers. Yesterday I saw a provocative Facebook ad that was made to rile up the fearful. The group “Color Us United” is holding a talk next week entitled “How Wake County Is Turning Into Woke County.” 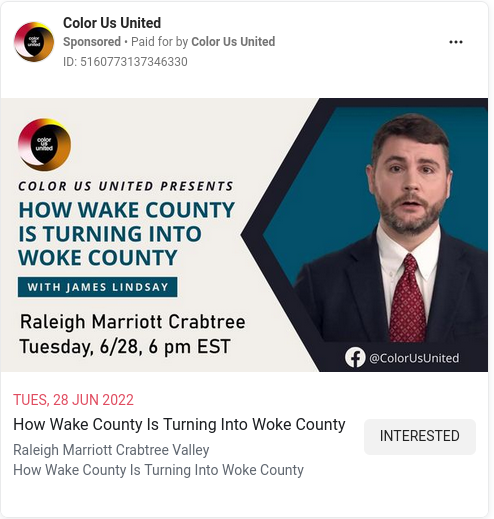 This got me looking into the organization, Color Us United. Color Us United appears to be a Morrisville-based non-profit run by Kenneth Xu, a 24-year-old who it seems makes a living stirring up racial animosity under the guise of condemning it. He’s been profiled in a few of North Carolina right-wing blogs as well as Hill.TV, and his narrative seems to be that racists should not be called out on their racism.

Take a look their catalog of ads Color Us United is currently running or has run on Facebook:

I was interested in knowing more about this organization, so I figured I’d start first by looking at its corporate filings. Color Us United calls itself a 501c(3), so it should have some paperwork somewhere. Let’s do a search on the North Carolina Secretary of State’s website: 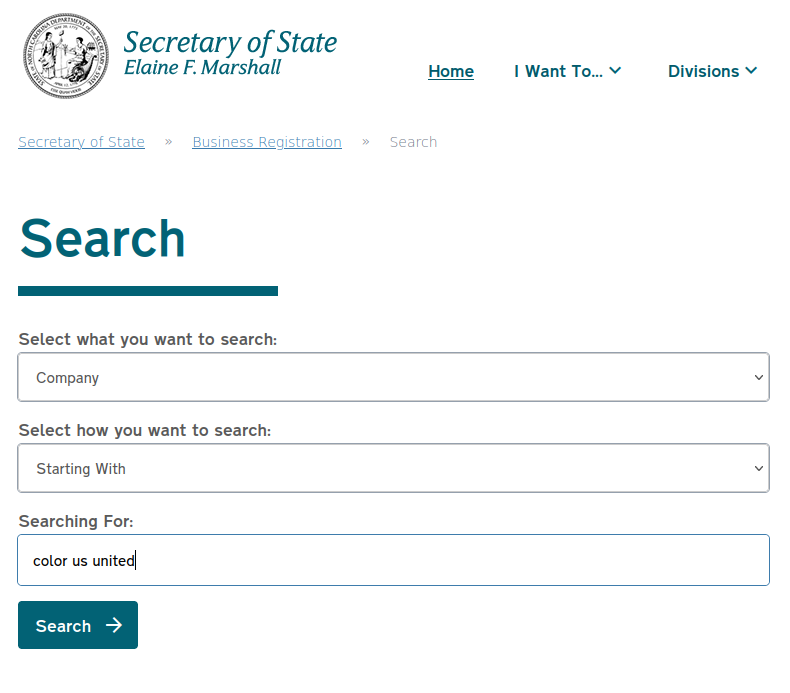 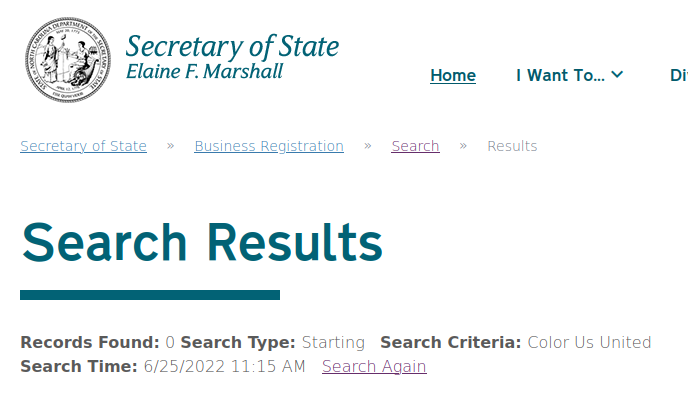 OK, well then it’s a charity, right? Let’s look to see if it has a charitable solicitation license on the NC Secretary of State site: 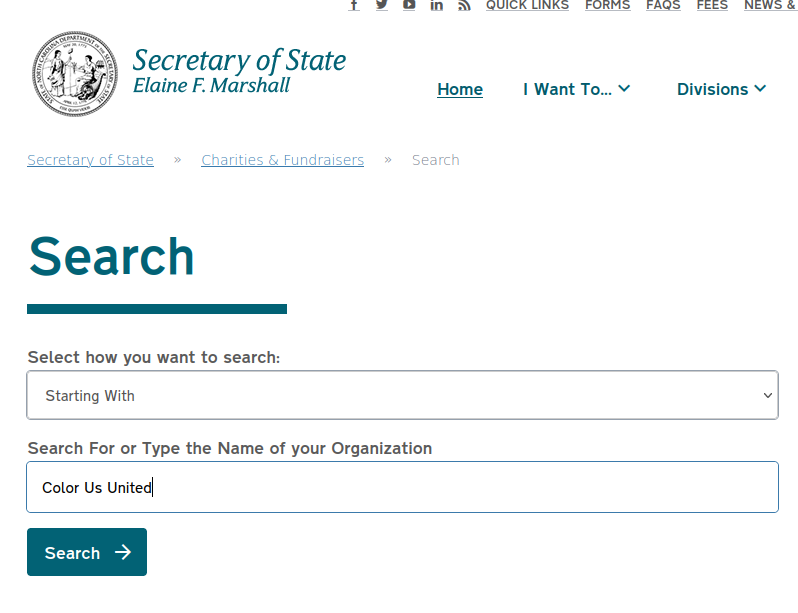 Hmm. No charitable solicitation license, either! 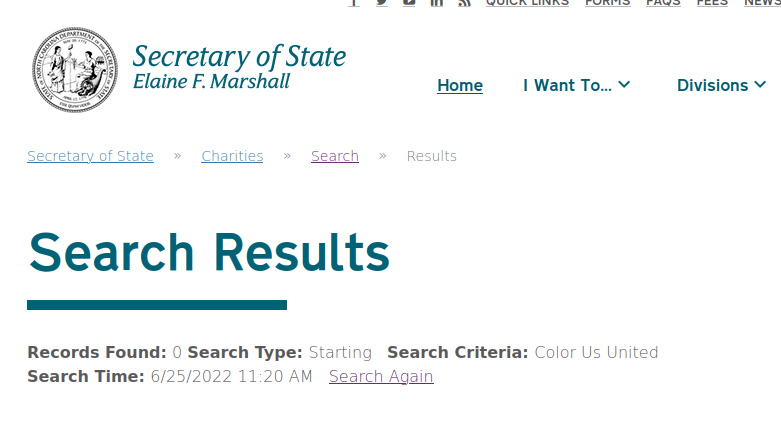 Interesting, huh? The Secretary of State does explain that not all charities are required to obtain a charitable solicitation license. Notably, those charities that bring in less that $25,000 a year and don’t compensate anyone are exempt from the license:

Color Us United does solicit donations on its website, where it tells potential donors that its EIN is 85-0513810. 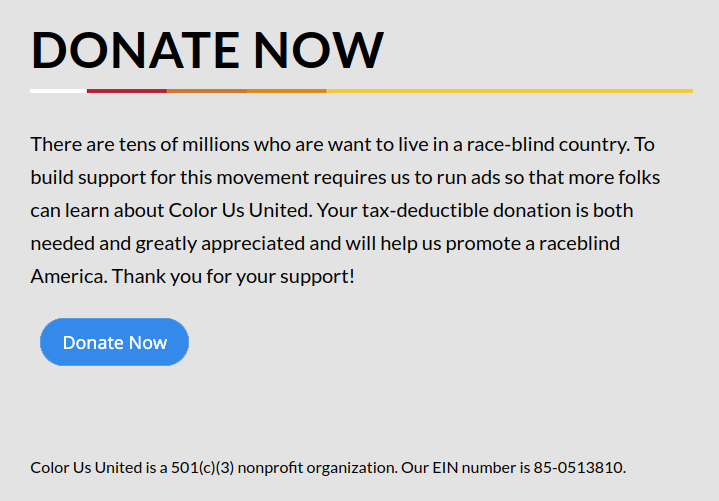 EINs are a handy way to uncover more documents about an organization. A Google Search on 85-0513810 gives us: 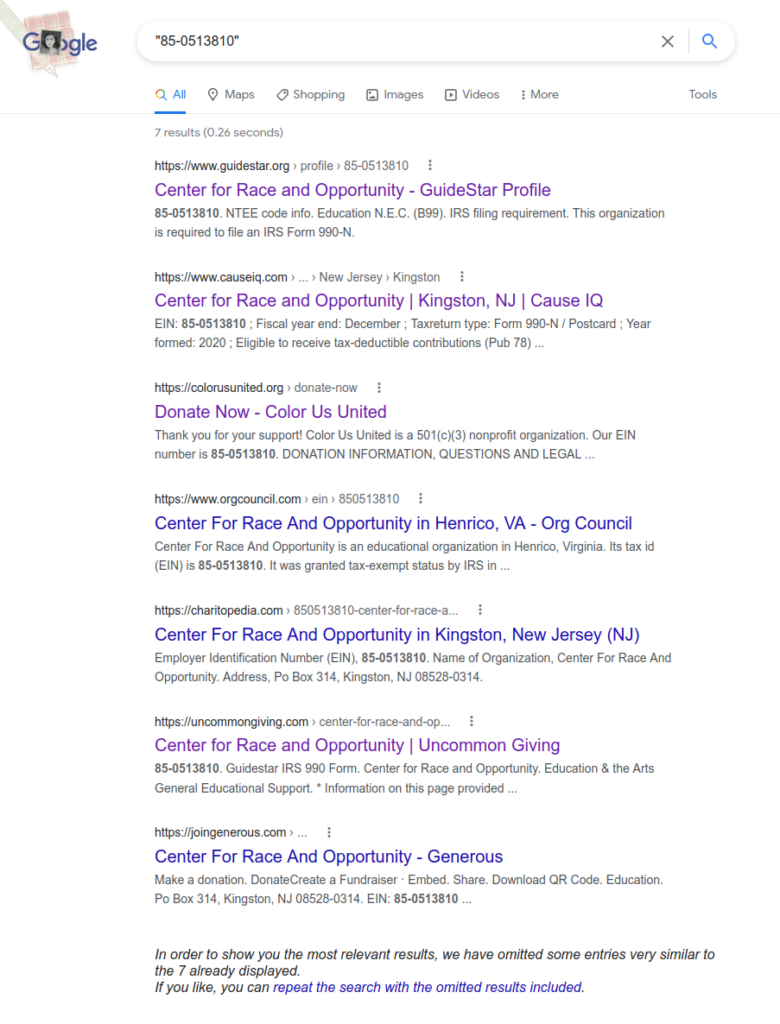 So, Color Us United does not appear to be the organization that was registered with the 85-0513180 EIN. Instead, the EIN appears to belong to a nonprofit called “Center for Race and Opportunity,” that seems to have two addresses associated with it: one at PO Box 314, Kingston, NJ; and one at 3781 Westerre Pkwy Suite F, Henrico, VA. The Henrico address appears to belong to a coworking space, according to a check of Google StreetView.

It’s possible that Color Us United has a Doing Business As (DBA) legal arrangement but I have not found anything yet to indicate this.

The Center for Race and Opportunity is/was a Virginia nonprofit that Mr. Xu apparently created, according to its entry in the opencorporates website. 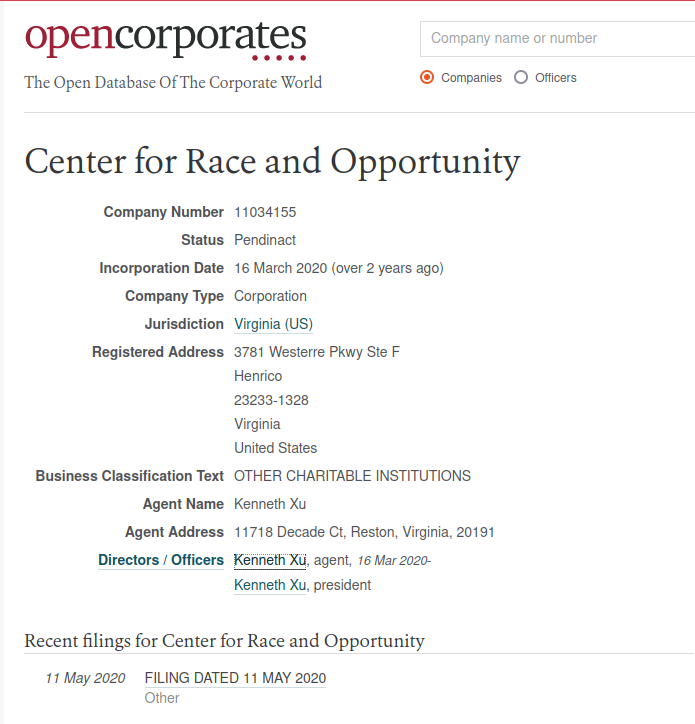 It appears from entries on the opencorporates and the Virginia-Company website that the Center for Race and Opportunity is in danger of being inactivated, possibly due to some late filings. 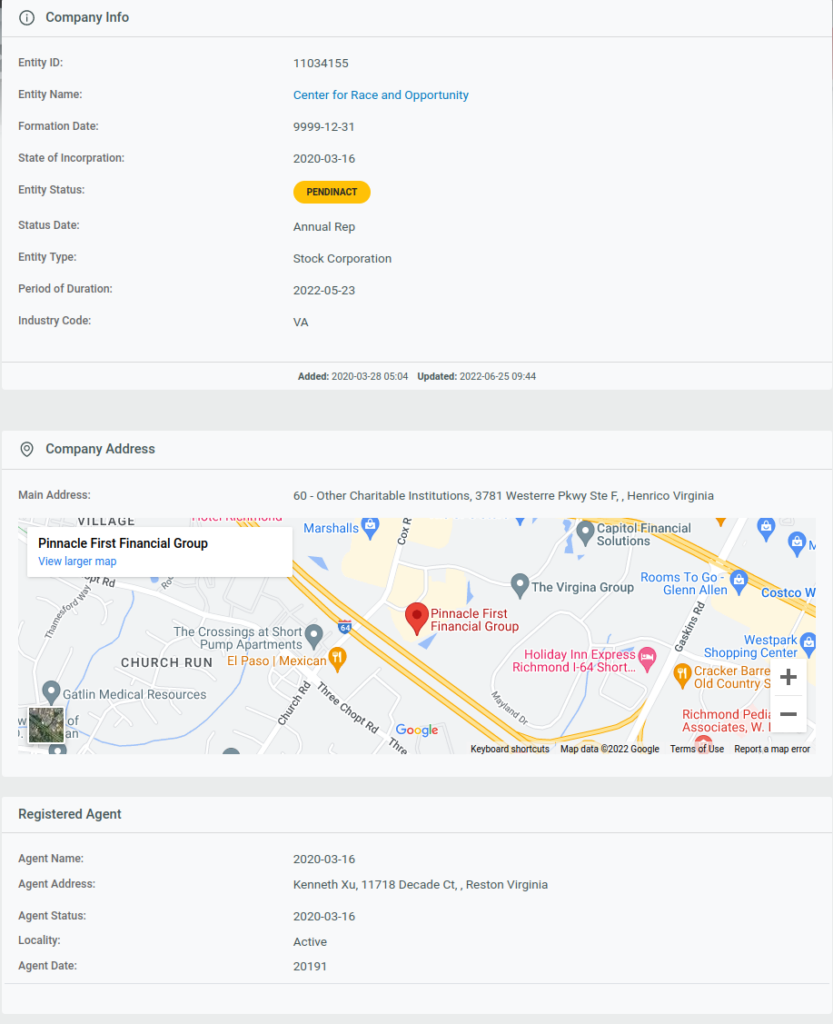 So what does this all mean? It seems at first glance that the Center for Race and Opportunity and the Color Us United organizations are small potatoes (if they are, indeed, individual organizations – it is hard to tell). It would be tempting to dismiss this as the hobby of a privileged but misguided kid but one thing really stands out here: the Color Us United group has spent over $100,000 on political Facebook ads over the last four years.

Here’s one of the many ads Color Us United ran, this one attacking the Salvation Army and reaching an audience greater than 1 million people and costing $4,000 – $5,000. That five grand could have made for a nice Christmas for some needy families but instead it went to defending racists. Lovely. 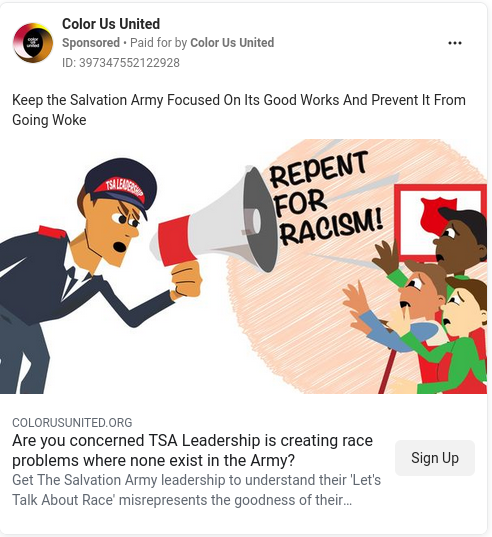 A hundred grand ain’t small potatoes, especially to your typical 24-year-old kid. So where is this money coming from? It’s really hard to say as there are few resources available online to track it. I have been unable to find Color Us United listed in any of the databases of the North Carolina Secretary of State. The organization tied to the EIN that Color Us United is using to claim its non-profit status has apparently not filed a recent Form 990N and is listed in databases as pending inactivation. And while a charity that spends $100k in four years on Facebook ads could conceivably be taking in less than $25,000 per year, in my mind this is very close to crossing a line – if not completely obliterating it. I am skeptical that Color Us United/Center for Race and Opportunity is taking in less than $25,000 per year and is not compensating anyone, especially considering that being president of the organization is the only job Mr. Xu lists on his LinkedIn profile at the moment.

Who is paying the bills at Color Us United? Color me unsure. I think it deserves more scrutiny.