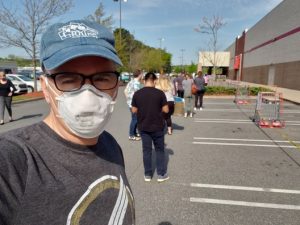 Wednesday marked the start of our seventh week in COVID-19 coronavirus quarantine. Not much has changed in our situation, which is good. We have gotten into a bit of a routine, with Kelly and me sharing an upstairs office, the kids doing remote classroom work in their rooms in the morning, and everyone retreating to quiet areas of our home when needed. Our new dogs (did I mention we now have dogs?) have taken to this routine very well as it’s the only routine they’ve known since we brought them home from the kennel. Having them around has provided us good company.

I still go out on occasion for groceries, braving the line at Costco about every two weeks. I try to get there when it first opens to minimize contact with potentially sick people. At the start of the pandemic, I might wait outside for 30 minutes while the store metered the number of people inside at one time. By my last visit on last weekend, the wait was down to six minutes.

The routine is this: wait in a “socially distant” line outside of the store, with 6 or more feet suggested between people in line. Get to front, show card, get let in in a group of two or fewer at a time. Grab a freshly-sanitiz3ed cart, then shop as normal except for following the taped arrorws on the floor, indicating what direction traffic should flow in each aisle. When it’s time to check out, wait 6 feet behind the person in front of you (helpfully marked again with tape on the floor), then put your items on the conveyor, being careful not to mix them as the plastic dividing sticks have been removed. Stand in front of the cashier with a large plastic shield between you. Take your items to the door, where your receipt is placed on a small cart in front of the inventory checkers. Walk out of the store through the “exit” area that’s been set up and back to your car.

Costco announced this week that effective May 4th it will require everyone in the store to be wearing masks. The “freedom” crowd is up in arms about this, whining that it’s somehow an infringement of their rights. I’m not sure why a privately-owned business can’t choose to abide by expert health advice in an effort to keep its employees and customers safe has somehow turned into an infringement on someone’s rights, but there you go.

As the pandemic has worn on I’ve become increasingly pessimistic about society’s chances, particularly American society. Trump has pretty much fucked this up every which way he could. We still have little to no testing, Trump continues to agitate the “freedom” crowds in each state, and alarming but credible reports have emerged that not only is the federal government failing to assist the states, the Feds are actively thwarting them by confiscating states’ own orders of protective personal equipment (PPEs) allegedly for use by the federal government! Governors in some states have told tales of sourcing and receiving orders of N95 masks from China and Korea, just to hachve federal agents show up and seize them without explanation.

To ensure Maryland got the masks it ordered from Korea, the governor secretly reached out to South Korea (even ROK’s ambassador) and had the shipment flown directly to Baltimore-Washington Airport so that it did not cross state lines. There, it was met by a contingent of National Guardsmen and State Police to prevent it from being swiped. It is now being guarded in an undisclosed location.

Yes, that’s the insane world in which we live. State governments are using troops to prevent federal agents from stealing their supplies.

North Carolina’s efforts might not be the best (I’ve read we are down the list of effective state responses), but Governor Roy Cooper had an 84% approval rating in a recent poll conducted by the conservative John Locke Foundation. Yes, these free-market types love to bias their poll questions and still Cooper blew the lights out. Republicans here are grateful for his leadership, too. I wrote before how Cooper was the most popular politician in North Carolina and this crisis shows many people still agree.

One of my ways of releasing some stress has been to take up karaoke. It gives me a moment where I can pretend I’m someone else, standing before a crowd in some bar and belting out songs. It’s not easy to rehearse karaoke during a pandemic and not annoy my family in the process. I had to wait until the rest of the crew went for a walk before I could crank up the amplifier. Recently I moved the setup to a spare bedroom which provides more noise isolation. So far no one’s strangled me yet, which is a plus.

I’ve been enjoying discovering all of the hidden talents my friends and family have been sharing, such as baking, cooking, knitting, music, photography, gardening, and the like. Many have been skills and abilities of which I was unaware. I believe several of my friends were unaware that I can sing, so it’s been fun to have them discover that about me, too.

One thing I am not happy about, though, are all the posts on social media intent to shame people into feeling guilty that they’re not doing something great with this time, acting as if this is some big vacation or something. In all honesty, I’ve not been nearly as productive in my work as I once was, and this is not simply a factor of working from home (WFH). I’ve worked from home for many years and can often get more done at home than at work.

Only, these aren’t normal times. The world we all knew is in the midst of collapsing and giving birth to something completely new. So panic, acknowledged or unacknowledged, is a real part of our lives at the moment. I spend a huge amount of time each day scrolling through the news to make sure I don’t miss hearing of the latest ongoing disaster, I check in with my friends and family to make sure they’re alive and well, and I work to ensure my own household is safe and secure.

Do I get work done in-between all of this? Sometimes. There have been plenty of days where, once dinner is over, I’ll head for my bed, totally wiped. If I’m lucky, I might get some sleep but lately sound sleep has been a scarce commodity. Nightmares have turned into ordinarily-innocuous dreams of being in public and mistakenly hugging someone or shaking their hand. The only bright side is waking in the morning to the sound of chirping birds instead of angry drivers racing to work.

If I hear another person promoting herd immunity I will punch them in their N95 mask, too. Herd immunity means getting over 80% of the public immune to the SARS-COV-2 coronavirus. The sane way to do this is via vaccine. The insane way is to sacrifice millions of people to needless illness or death so that they become either immune or dead. Since the best case scenario for the delivery of a virus is still 18 months away, those pushing to open the states and country are essentially advocating for a widespread slaughter. This seems to be a Republican point of view, many of whom were all too happy to raise the spectre that Obamacare would implement “death panels” yet are now themselves advocating for the sacrifice of the weak. Funny how these pro-life perspectives don’t value Grandma’s life as much as the unborn, isn’t it?

Oh, I got bored the other day and kicked off a video chat with some friends, just to hang out. I soon found myself interviewing one of my friends about his new hobby. Later I realized how much fun that was to get him talking and guide the conversation. It was a reminder that I should pursue this further.

I’ve kept up the video diary since our quarantine, sometimes skipping weekend updates. Still not totally ready to share it publicly but this might happen some day.

This has become a book so I’ll close for now. I pledge to do more blogging as this is just a crazy time.