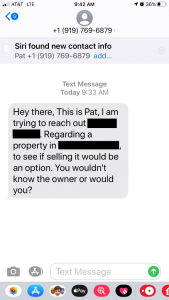 “Hey there, so sorry if I have the wrong number. I am Pat and would love to contact [homeowner]. Regarding a property in [homeowner address], in order to determine if there is interest in selling. Do I have the right number?”

“Hey there, This is Pat, I am trying to reach out [homeowner – sic]. Regarding a property in [homeowner address], to see if selling it would be an option. You wouldn’t know the owner or would you?” 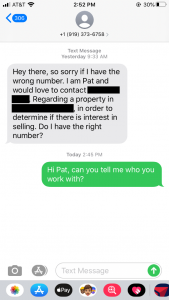 Both were sent at the same time of day, 9:33 AM, but on two separate days. They were from two different phone numbers as well. Another neighbor received a similar text on Nov 20th, I’m told. (Coincidentally, I’ve been getting and ignoring scammy calls at home from 919-769-68xx numbers for several weeks now).

Being the curious sort, I did a few Google searches for this text and came across a number of similar texts, only from different alleged people. A search of the venerable 800notes.com shows only one other similar text, this one from “Alex” from the number 832-934-9960:

“Hello, apologies if this is not a good number. This is Alex, I am looking for [homeowner]. Regarding a property in [homeowner address], in order to see if selling it would be an option. You don’t know the owner or do you?”

Obviously these are connected. How many people are getting them? How come there isn’t more information about them online? How is it that both my friends got the texts on separate days but at 9:33 AM on those days? And what’s the ultimate goal here? Is this just some bot that is out there, doing data cleanup to match phone numbers with names and addresses?

I’ll keep you posted as I learn more about this supposed scam.

I found another Internet hit, this thread on the City-Data website. This one’s from someone in Minnesota and dates from November 2018:

Today, I got this one which is pretty typical:
Exact words:
“Hi (and my actual 1st name)! My name is Alex, I’m a local home buyer reaching out to see if you’re interested in an offer for your home on (my actual address)? Thx

I refuse to text back. But a couple of times, I called with my Google Phone # (same phone but with a hidden #) and got a vmail message asking to leave my name and address. I left out the address but gave my google, non-traceable #) and said that I wanted to sell my property”. No response….

Does anybody know what their scam might be? People who have called or texted back haven’t gotten a call back. Something smells fishy.

Got a text message. Says his name is Tim with Home Buyers. Wanted to see if I wanted to sell my house.
Scam?

The main company doing this, is called “1 800 Fair Offer”. They illegally robocall consumers trying to buy their houses FAR below market value. The company is owned by an arrogant guy named Sean Terry. This goof actually has videos posted on YouTube to teach his followers how to illegally robocall for more leads. I am in the process of filing a complaint with the Arizona State Attorney General’s office, and am also considering a class action suit against this company for their illegal robocalling.

I’m going to see what I can find out about “1 800 Fair Offer” and if there have been any complaints against them for illegal robocalling/texting.