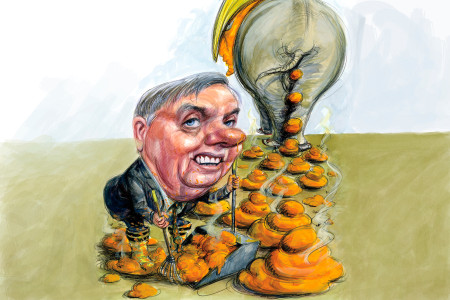 Lindsey Graham and Donald Trump were born nine years and one month apart. Trump came first, but when they appear side by side, as they often do these days, the men look about the same age. On November 6th, in the East Room of the White House, the president held an event to mark the record number of federal judges his administration has appointed, and Graham was there, having played a critical role in the achievement as chairman of the Senate Judiciary Committee. Trump’s staff had scheduled the event in part to shift focus from the House impeachment investigation, to remind any wobbly Republicans of the reason they’d held their noses and voted for the guy in the first place.

Over the course of his three terms representing South Carolina in the Senate, Graham had become predominantly known for two things: extreme hawkishness on foreign policy, following the lead of his close friend and mentor, the late Arizona Sen. John McCain, and a bipartisan streak that resulted in high-profile attempts to cut big deals on issues like immigration reform and climate change. A former senior staffer for a Democratic senator who has worked alongside Graham on bipartisan legislation tells me, “Like John McCain, he was a conservative Republican, but it was always worth asking where he was going to be on a particular issue, because he wasn’t completely beholden to party orthodoxy. He’d often be way out ahead of his staff, negotiating on the Senate floor unbeknownst to them, and they would be playing catch-up.

Will Folks, a conservative political blogger in South Carolina, says, “The joke here is Graham has a ‘count to six’ approach to governing: He spends the first four years of his term doing whatever he wants, veering off toward the left, and then the last two years, when the electorate is paying more attention, he comes right.

”Graham is “never flustered, and just a natural at dealing with people who don’t like him,” says David Woodard, a political-science professor at Clemson University who ran Graham’s first two campaigns for the House of Representatives and recalls the first-term congressman as quickly becoming the unofficial social director for his freshman class, though he added, “You’re going to find Lindsey knows a lot of people, but he’s not close to anybody.”