Update 2019-08-14: I have been pondering Friday’s arrest of Abe Zeiger for bringing a gun into the North Carolina General Assembly and it’s possible that I was wrong about his intentions. Yes, I certainly did find a number of gun-themed and seemingly anti-government posts on his Facebook page but to be fair, these were all forwarded and not authored by Zeiger himself. Other photos portray Zeiger as a family man and I found no evidence that things weren’t going well with his life. I am sorry if I misinterpreted the digital breadcrumbs I was able to piece together.

On the other hand, I hope he sees how someone could draw this conclusion. The Bundy item was especially disturbing – celebrating the pointing weapons at law enforcement officers is no joke – and what’s more it wasn’t even remotely truthful. To repost this on Facebook a week before showing up at the state legislature with a pistol and 30 rounds is enough to put a community on edge.

Any why was the gun in his bag when he didn’t have a concealed carry permit (CCP)? Why didn’t he declare the gun when asked by officers at

While his intentions could have been completely innocent when he showed up with a gun, the truth is that no one could know that for certain. It only takes seconds for a mass shooting to occur and officers don’t have the luxury of trust.

Zeiger could very well be a stand-up guy, just trying to do the right thing. If so, I applaud his intentions though I’d rather he left the “good guy with the gun” role to law enforcement. At the same time, he made a big mistake by not removing his weapon before entering a secured building, and for carrying a weapon around in his bag without possessing a CCP. While I am not as concerned as I once was that he may be a threat to society, there is no getting around the fact that he was not being responsible with his gun. 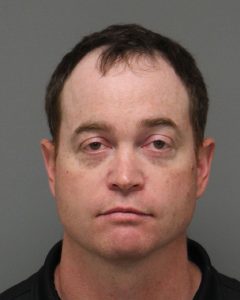 On Friday afternoon, a man was arrested at the North Carolina General Assembly for trying to sneak in a 9mm pistol and two magazines of 15 rounds apiece. The man, Abraham James Zeiger, age 36, was charged with unlawfully carrying a concealed weapon and violating legislative building rules. The story by Lauren Horsch in the N&O quoted the N.C. State Capitol Police as expressing surprise at their catching Zeiger as he was not on their radar, so to speak. The General Assembly implemented stricter security measures at the General Assembly in April of last year.

“I can’t be more pleased with the (screening) process,” General Assembly Police Chief Martin Brock said of the security measures that caught the gun. “It could have easily been missed.”

Since this story took place on a Friday afternoon – a time when news stories tend to get lost in the lull of the weekend – there didn’t seem to be many in the media who were asking just who is Zeiger? Also since I happen to know several people who work in the General Assembly, I wanted to know what might have motivated Zeiger and what he may have been planning to do with that gun. It didn’t take me long to find the answers.

First up was a search through voter records. An Abraham James Zeiger is registered in 2017 as Unaffiliated and has no voter history. Not much luck here: 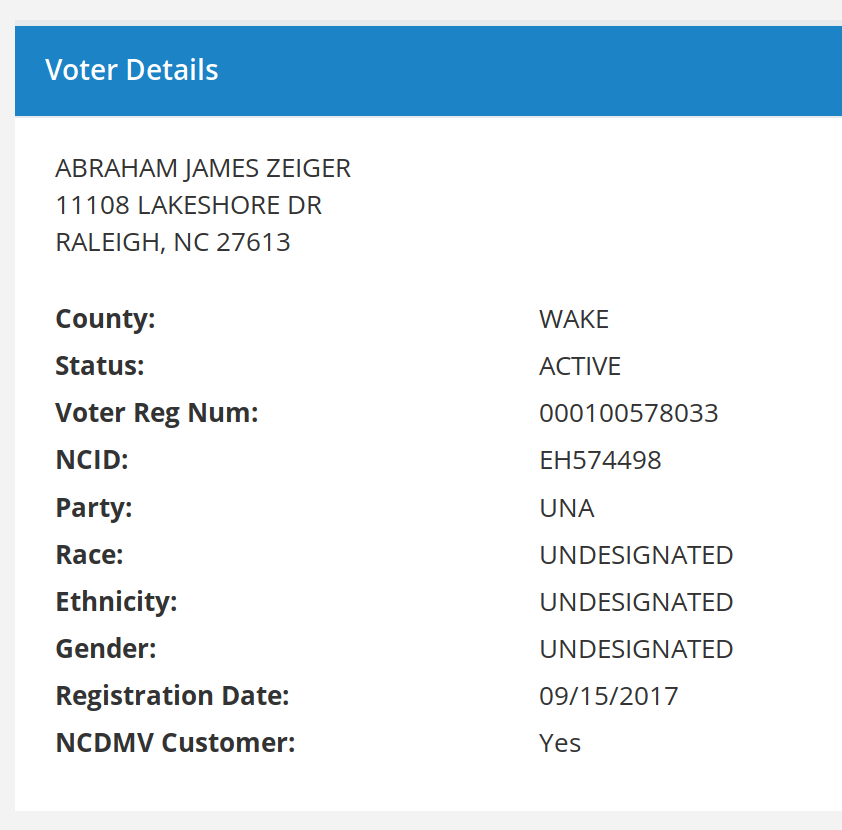 A search on Spokeo brings us this:

A few Google searches show a LinkedIn page for an Abraham J. Zeiger who appears to be the man in the mugshot. According to the LinkedIn profile, Zeiger works as VP of Operations for Branz Technologies, a company in Durham, NC which once had a location in Sterling, VA (along with Zeiger). Documents filed with the North Carolina Secretary of State list Zeigler as an executive with the company.

More searching shows Zeiger commonly goes by the name Abe Zeiger. A Google search for Abe Zeiger leads us to his Facebook page.

It is on Zeiger’s Facebook page where we find the goods. Zeiger posted a number of anti-government, anti-abortion, pro-Second Amendment items to his Facebook page.

Just one week ago, Zeiger reposted an item praising the gun-toting mob who unlawfully threatened federal officials who were enforcing the law against Cliven Bundy in 2014: 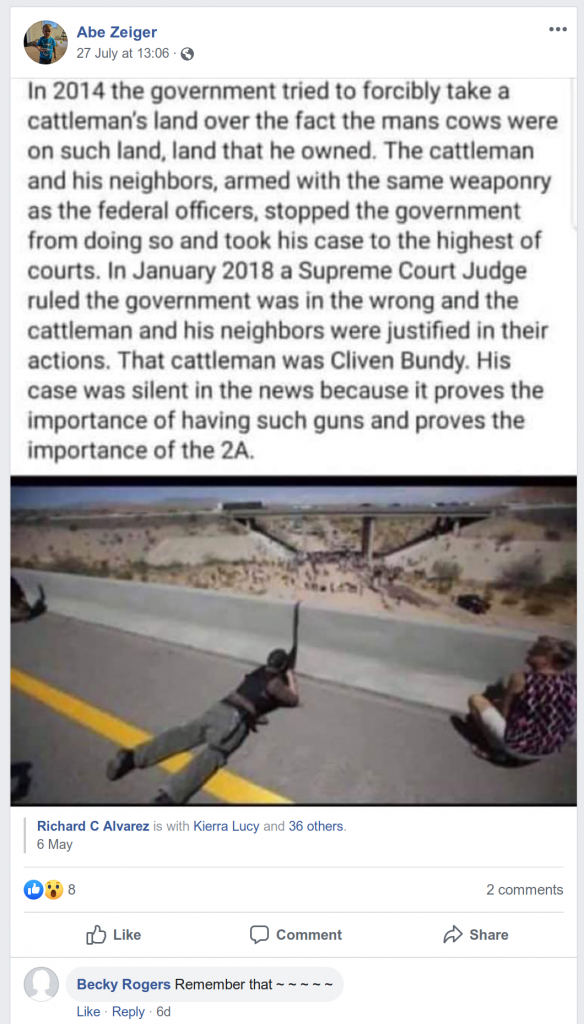 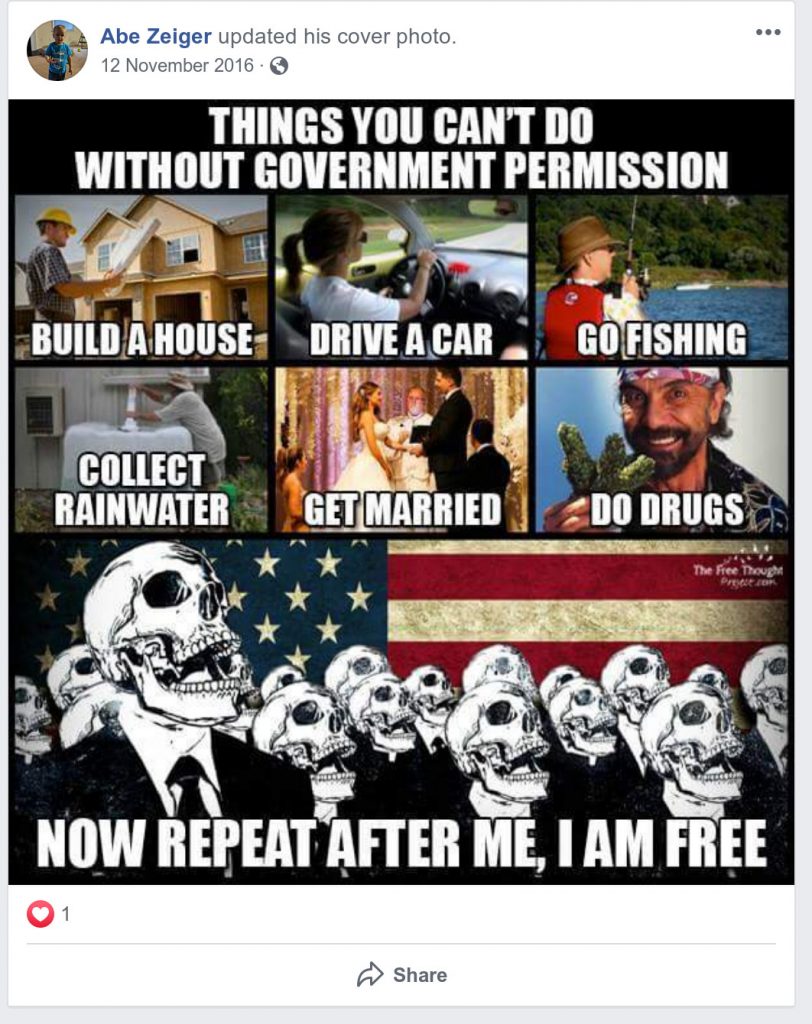 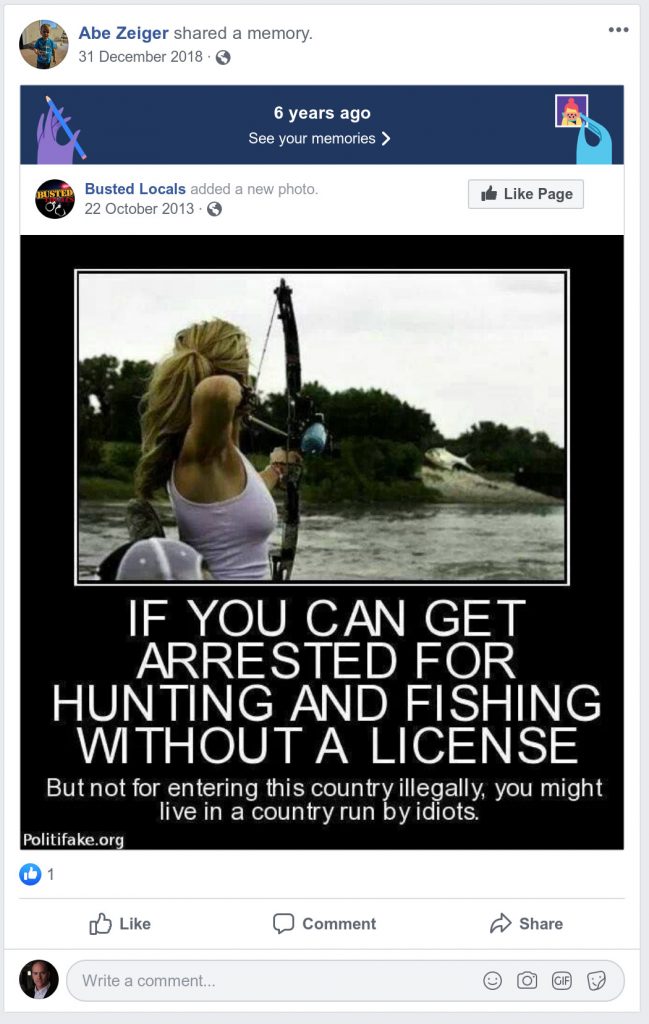 Another search turns up Zeiger’s name and business in a Town of Cary bidding document. I can never reconcile the irony of people who express anti-government views while at the same time making a living (at least indirectly) from government contracts. 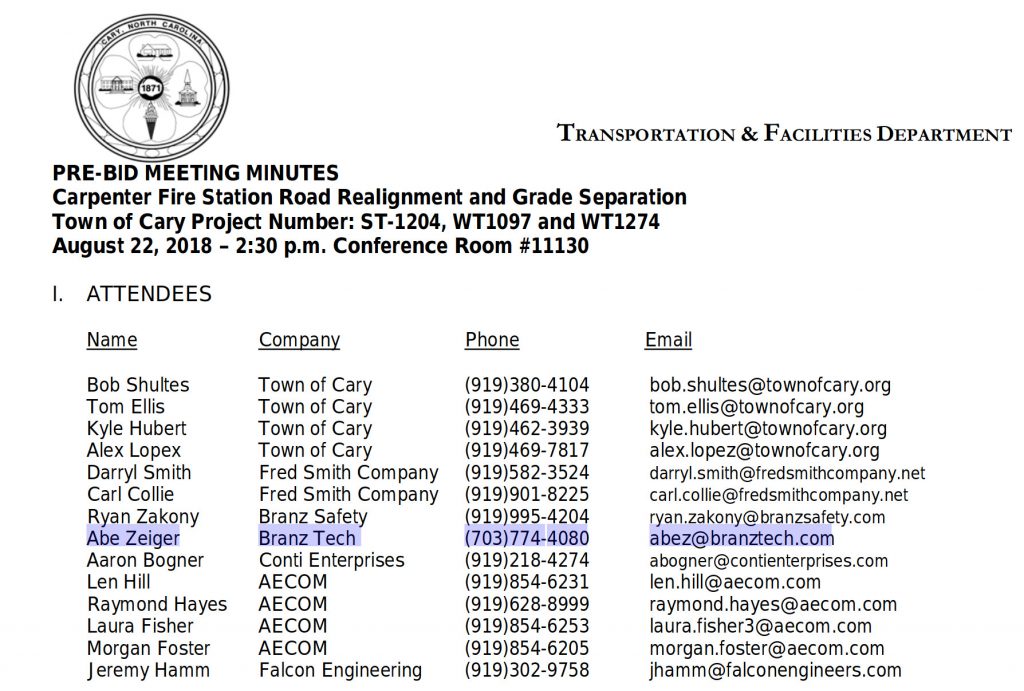 Then there are several Second Amendment posts. From February: 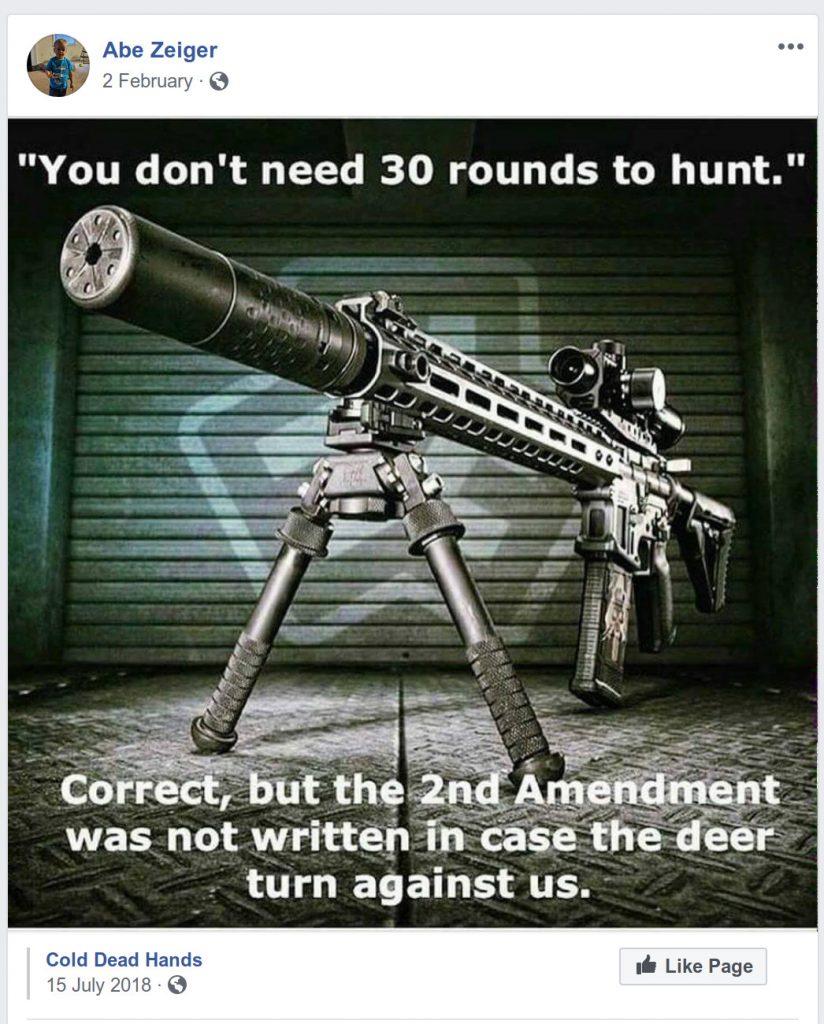 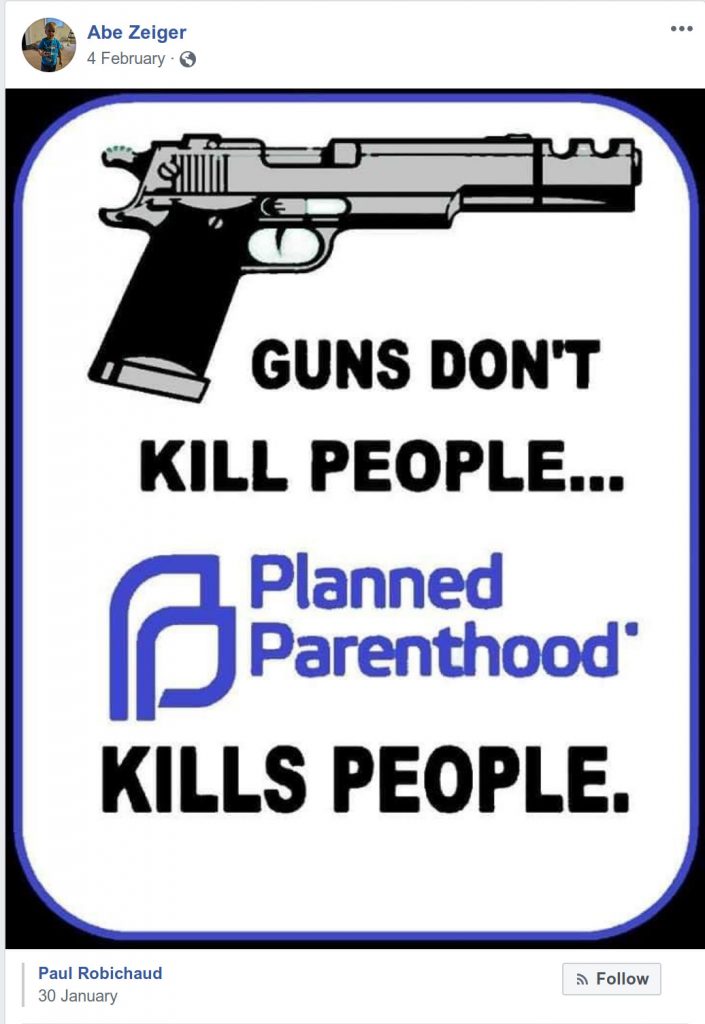 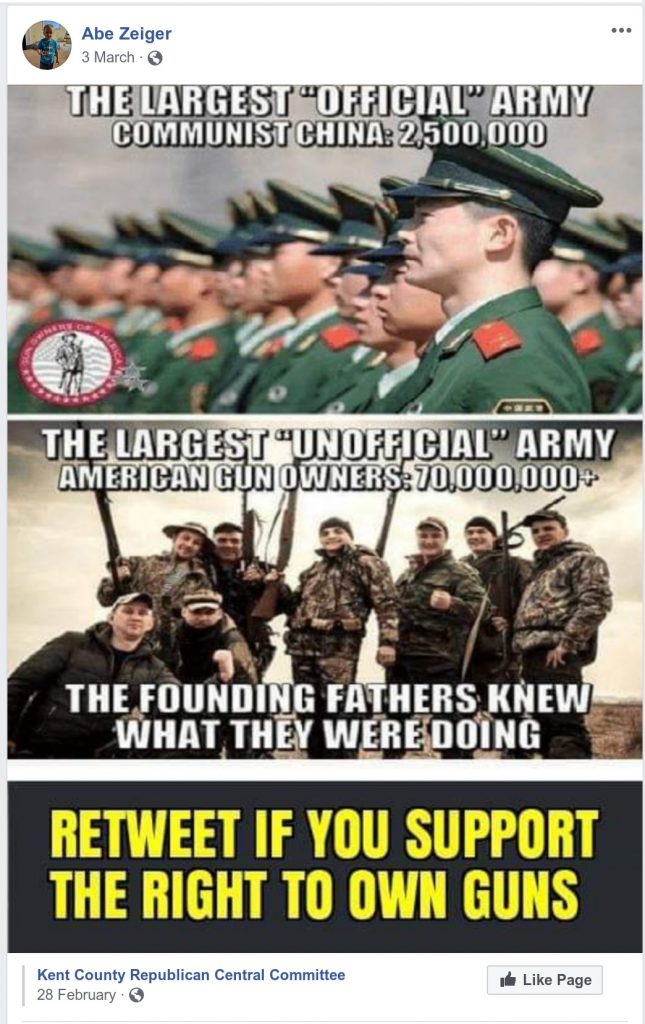 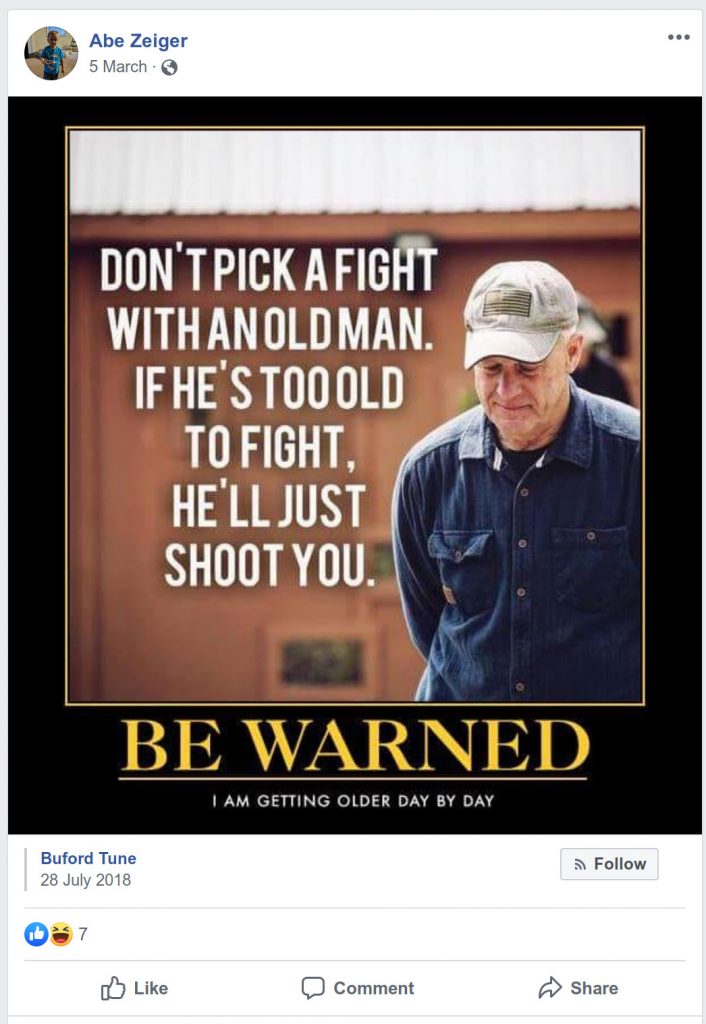 Zeiger’s court date is August 28th in room 101 of the Wake County Courthouse.