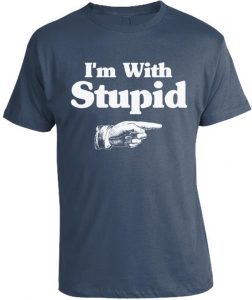 I was doing some online searching for a friend with whom I worked a long time ago, so I put her name into The Facebook to see if she was around. A woman with the same name came up in the search results. She was about the same age, listed as “retired,” and looked somewhat similar to how I imagined my friend to look now that twenty-five years have passed since I saw her last. Perusing this woman’s post soon convinced me this wasn’t the old friend I was looking for. In fact, there was this galling comment on this news story that made my jaw drop. It was on this BBC news story about the Lincoln Memorial being vandalized: 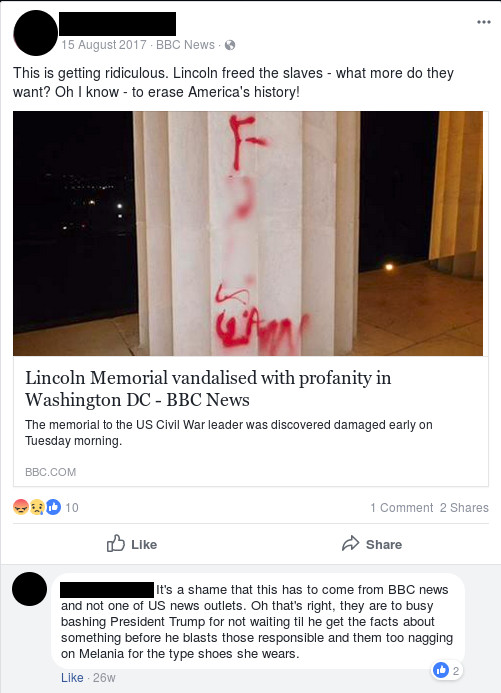 “What more do they want?”

“This is getting ridiculous,” she writes. “Lincoln freed the slaves – what more do they want? Oh I know – to erase America’s history!”

I had no idea that this woman was a master detective on par with the greatest of the world. Why, criminals far and wide must be shaking in their boots knowing that The Great Arm-Chair Detective is on the case. The Park Police should take the day off. Heck, take the whole week off, guys.

The Arm-Chair Detective has solved the case, you see. She knows just who vandalized this memorial, and I bet if you asked her to describe the perpetrators her description would almost certainly include the word “black.”

Because, you see, Ms. Great Arm-Chair Detective is a raging racist.

Now maybe she doesn’t realize she’s racist. Maybe she has lived her entire life in a white-people cocoon and has never had any meaningful interaction with people who are different than her. It doesn’t matter the cause because the effect is the same: black people are the “they,” because everyone knows white people have never sprayed graffiti on anything, ever, right?

So congrats, Ms. Detective, you’ve cracked the case! That is, if the case in question is whether or not you should reexamine your beliefs and prejudices.

Former presidential candidate John Edwards used to say there are two Americas, only they’re not rich and poor ones. There’s the America I live in and there’s the stupid one.