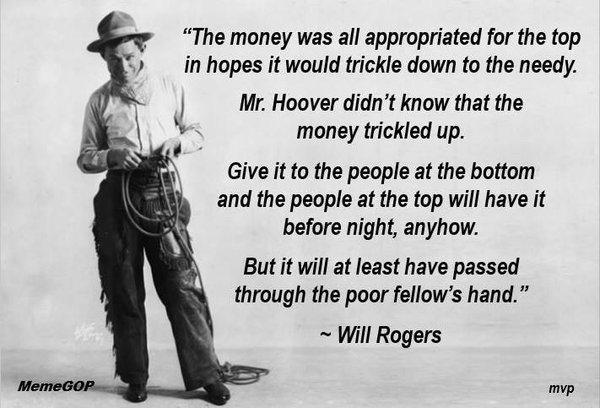 Will Rogers on “Trickle Down”

A few weeks ago I was scrolling through my Facebook feed when I saw one of my liberal friends had posted humorist Will Rogers’s famous “trickle down” quote. My friend didn’t offer much (if any) commentary on it other than to post it, and indeed I’ve seen it widely shared. It’s worthy of sharing.

I’m sure alcohol was involved in this exchange (at least on the part of Conservative Guy), and Liberal Guy soon deleted it, but it was shocking to read. It flabbergasts me that some people are so blind to their privilege, unable to see the shoulders they stood on – and, often, the pure luck – that got them where they are. Hard work? Yeah, that is part of it, but it’s not the only thing holding others back. Not by a long shot.

Secondly, never would I consider someone to be less of a citizen for not serving in the military. I’ve said before how we have so many heroes in our daily lives, not just those who served in the military. My family and I attended the N.C. State basketball game against Notre Dame on Saturday on what was the university’s Military Appreciation Day. I felt sheepish when the announcer asked veterans to stand and be recognized. To me military service is no big deal. There are lots of ways to serve.

For me, the most valuable lesson from my military service is the insight I gained from serving with men from so many backgrounds. White, black, Latino, Puerto Ricans, Filipinos. Rich, poor. Straight, gay. Straight arrows and those whose choice was between the military and jail. So many of these guys are like brothers now, and will be for life. For a sheltered rich white kid growing up in the South it was a world-changing experience. If you come out of the military with anything other than a stronger appreciation for the struggles of others you’re doing it wrong.

Both Liberal Guy and Conservative Guy own their own businesses, which is great. I have no doubt that both of them work hard but only one of them recognizes the “village” it took to get him where he is.

I hope this understanding spreads. No matter what one’s ego might tempt one to think, no one does it alone.