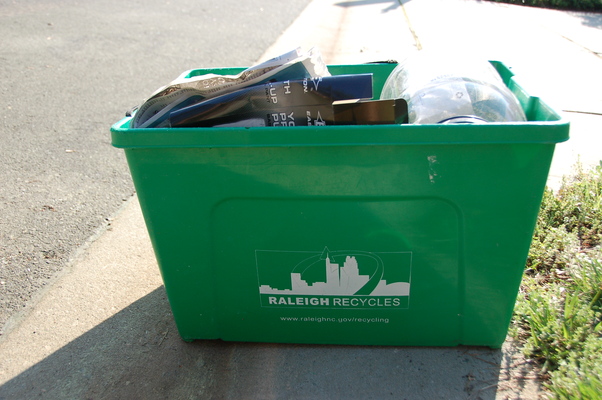 The City of Raleigh has teamed up with a for-profit company to collect clothing along with recycling. The company, SimpleRecycling, will resell the items.

I know Bianca Howard and I think the city’s recycling program is top notch, however I’m uneasy with the city’s staff doing the dirty work of a for-profit company. I’m especially uneasy with the idea that this clothing could instead have gone to charities to distribute to people who need it, free of charge. Austin’s deal with the company has become controversial after local non-profits complained it was hurting their donations.

RALEIGH, NC (WTVD) –The City of Raleigh will begin to offer a textile recycling program on February 20th.Stay on top of breaking news stories with the ABC11 News AppRaleigh is the first city in North Carolina to partner with Simple Recycling, a for-profit company that sells the items domestically and internationally so residents will not receive a tax write off for their items.”They’re providing this service at no charge to residents of Raleigh,” City of Raleigh Environmental Coordinator Bianca Howard said.”Residents who prefer to get a tax deduction or help a favorite charity should continue to do that,” she said. “We really see this as another way to help people learn about textiles and keep good textiles out of the landfill.”