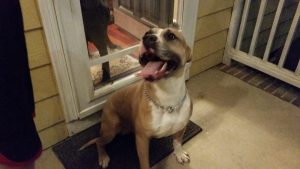 Last night we had an unexpected guest as a dog followed Hallie home from her neighborhood run. It was a pitbull-looking dog named Dexter who turned out to live at a home just down the street.

When we first were presented with Dexter, the excited pup was all over the place, barely sitting still for me to take a photo. His excitement was contagious, it seems. As I scrambled to photograph the dog and then to ask the neighborhood for advice, both Hallie and Travis were excitedly barking out suggestions for what we should do.

I had to ask them to stop so I could think clearly but this morning I began to appreciate how awesome this really was. We were presented with an emergency event – a strange dog needed rescuing – and both kids jumped in right away with ideas for what to do. I’d seen them do this before – that time when Hallie jumped into gear when a classmate had a seizure, for instance – but it was great to see it demonstrated again.

The world won’t change unless there are people willing to change it. I’m super-proud that I’m helping raise two who won’t pass up the opportunity.